Treating Pneumonia in the Elderly with Heart Failure 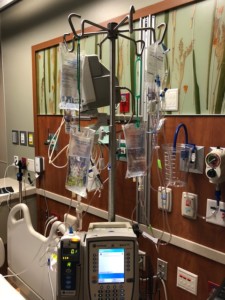 Here’s what you need to know about treatment if your elderly family member is diagnosed with pneumonia but has pre-existing heart failure.

Treatment of pneumonia in a heart failure patient, especially one of very elderly age, isn’t as simple as, “Take two antibiotic pills every day for seven days and that should clear it up.”

Treatment for Pneumonia in a Heart Failure Patient: What to Expect

An elderly person with pneumonia, who has pre-existing heart failure, presents a tricky situation to doctors.

My very elderly father, who has congestive heart failure, was diagnosed with pneumonia at an urgent care center. The doctor wanted him admitted to a hospital.

When my mother was diagnosed with pneumonia for the first time at an elderly age, she too, had congestive heart failure, but was not admitted, and instead, sent home with a prescription for antibiotics and recovered.

A few years later she developed pneumonia a second time and was admitted overnight in the observation unit, but discharged the next day with a prescription for antibiotics and recovered.

I anticipated that my father, whose heart was seemingly stronger than my mother’s, would be discharged the next day with a prescription for antibiotics.

But he was discharged from the hospital seven days later.

Here’s a summary of how the pneumonia treatment went down, due to the pre-existing heart failure.

The pneumonia treatment involved an IV infusion of fluids. Due to the pre-existing heart failure, my father was on Lasix, a diuretic that promotes fluid excrement from the body.

Early on in his admission, my father’s weight went up, which meant unwanted fluid retention.

It was not clear exactly how much of this was being caused by the IV infusion of fluids; any fluid buildup in the lungs from the pneumonia; or the pre-existing heart failure being worsened by the infection.

So the doctor had to stop the Lasix to prevent a dangerous situation of hypotensive crisis.

However, Lasix is needed to prevent fluid overload from congestive heart failure which could build up around the heart, in the lungs and in the lower legs. 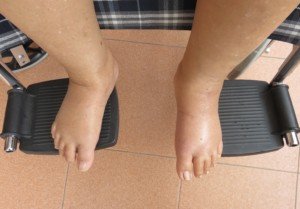 The doctor said that pulling Lasix meant taking the risk of worsening the heart failure which could cause more fluid in his lungs, but at that point, she did not see any clinical signs of this.

Upon admission she heard “crackles” in my father’s lungs, and his room oxygen was below 90, necessitating supplemental oxygen.

He was on continuous telemetry for heart rate, rhythm, pulse and blood pressure, and of course, oxygen.

An hour-long antibiotic IV infusion had already been given at the urgent care center before he was transported by ambulance to the hospital (where he was taken to the “Intermediate Care” unit).

Do not panic just because the antibiotic is given via IV infusion rather than as a pill.

When a person needs antibiotics and they are in a hospital, these drugs are often given intravenously because this is just more effective than oral administration. 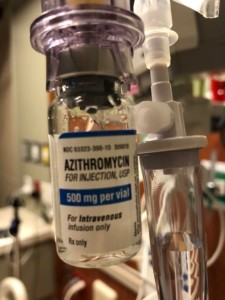 Furthermore, oral administration is more likely to cause nausea. My father was on two antibiotics once he was at the hospital, and at some point, one of them was given orally. His resulting nausea meant a return to the IV infusion.

I was told by two doctors that pneumonia lowers blood pressure. So between the Lasix and the pneumonia, the doctors were faced with a tricky situation.

Fluid infusion is vital for treating pneumonia, but fluid infusion also adds to fluid overload, which is precisely what we want to prevent in someone with heart failure.

You can see just how really sticky this is getting. It’s not cut and dry. It’s a day by day thing.

The goal was to get my father’s weight back down to its baseline while effectively treating the infection and preventing dangerous fluid overload while getting his blood pressure back up to normal.

I was concerned that his reduced appetite would create a false illusion of fluid weight loss because he wasn’t eating as much, so I encouraged him to eat as much as he could (e.g., finish a whole chicken sandwich rather than just half).

The Lasix ultimately had been pulled for only one dose. But it was something, along with the low blood pressure readings, that the doctor watched like a hawk.

The first night of his admission I was told some unnerving news: That if they couldn’t get his blood pressure up with conservative measures, he’d have to get a particular drug to do this – but the drug would require a central line IV.

A specially trained nurse sets this up, and it’s done in the ICU, which meant that if my father needed this procedure he’d have to be transferred to the ICU.

Thank goodness next day I was told this was no longer a consideration, and he remained in Intermediate Care.

 Monitor the blood pressure for tendencies to get too low.

 Monitor fluid overload and when and how much Lasix to give.

 His weight gain was expected and was diligently monitored for changes.

 Even when his weight got down to within four pounds of his baseline, the situation was still very delicate. Nevertheless, the doctor told me he was improving with each day.

By the time he was within four pounds of his goal weight, I was told that the pneumonia was no longer a concern, though the doctor still heard crackling.

Throughout the stay, my father’s cough continued, though it didn’t seem as frequent as it was in the hours before he was taken to the urgent care.

It was not possible to determine if the cough, at least within several days of admission, was from heart failure fluid overload or a residual lung infection (pneumonia).

I was also eventually told that he may have had bronchitis, as this appears similar to pneumonia on a chest X-ray.

My father’s kidneys remained stable throughout the whole ordeal, even though pneumonia can worsen the kidneys in someone with pre-existing heart failure and pre-existing chronic kidney disease.

Eventually the doctor said she wanted to keep my father another day because he required two liters of oxygen despite a very slow walk with a walker (knee problems).

She didn’t know if this was his baseline because a recent routine cardiology checkup had measured the oxygen level only when he was seated.

She also continued to hear crackling through the stethoscope and saw, on a second chest X-ray, fluid in the interstitial lung tissue. She felt it was not safe to send him home.

The plan was to give him more Lasix—but only as much as his kidneys could tolerate, since Lasix could worsen kidney function in patients with already-compromised kidney function.

The doctor said that “When the kidneys don’t like it” she will stop increasing the Lasix dose.

On the fifth day he was taken off the antibiotics, so the remaining issue, then, was getting his weight back down safely.

On the seventh day the doctor said that his oxygen went down while he was walking — but in response to him holding his breath due to knee pain. His weight was back to baseline and she discharged him.

Throughout all this, my father actually felt quite fine (the first infusion of antibiotics valiantly began the process of kicking out the infection).

Prognosis of Patients with Pre-Existing Heart Failure Who Develop Pneumonia

A paper in the Journal of General Internal Medicine (Thomsen et al) states: “Thirty-day mortality from pneumonia was 24.4% among heart failure patients vs. 14.4% among other pneumonia patients.”

The paper adds, “We identified 33,736 patients with a first-time hospitalization for pneumonia, of whom 3,210 (9.5%) had a previous diagnosis of heart failure. The median age was 73 years…”

In addition: “We were able to adjust for a wide range of prognostic factors assumed to be important for pneumonia, including cardiovascular disease, chronic lung disease, liver cirrhosis, and renal disease.”