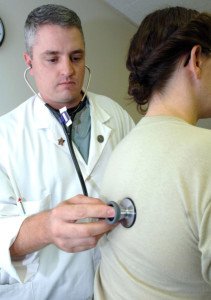 Researchers say that radon, not secondhand smoke, is the second-leading cause of lung cancer in people who’ve never smoked.

This is especially surprising because the combination of smoking and chronic high radon exposure has a synergistic effect on increasing the risk of lung cancer.

The American Cancer Society reports that every year, about 20,000 people in the U.S. die from lung cancer caused by radon.

So that means about 3,000 never-smokers every year die from radon-induced lung cancer.

But this doesn’t tell us how many never-smokers are diagnosed with radon-caused lung cancer every year.

Furthermore, the statistic doesn’t include data on how many years the exposure was, if there were intermittent periods of low exposure, and/or the average amount of exposure during all those years.

Another variable that needs to be adjusted for is if those never-smokers who have radon-associated lung cancer were ever exposed long-term to secondhand smoke.

Apparently, there’s no data on how many people in the U.S., who’ve never smoked, are diagnosed annually with lung cancer caused by radon.

“I don’t know the answer to this,” says Alex Little, MD, a thoracic surgeon with a special interest in esophageal and lung cancer.

“I have looked around and I am skeptical of the numbers of radon-associated lung cancer I find mentioned,” continues Dr. Little.

“The numbers are based on studies of only a few (less than 10) states and extrapolated from studies in miners where the exposure is much greater than in homes.”

Other studies have involved comparing the radon levels of homes of lung cancer patients to those of healthy similar people, and comparing lung cancer deaths or cases in areas of varying levels of radon concentration.

There have also been studies on rodents that show a cause-and-effect relationship with radon and lung cancer.

“Once the EPA published their numbers, based on the studies I mentioned, they just keep being repeated,” says Dr. Little.

“I’ve seen nothing recently validating their assertions. I have never encountered anything in the clinical literature that suggests oncologists or surgeons have found radon-associated lung cancer to be as significant an issue as the EPA suggests.”

It is apparently not known how many never-smokers in the U.S. or any largely populated country go on to develop lung cancer that can be definitively traced to radon, let alone if other causes of this disease such as secondhand smoke and industrial chemicals played a contributing role.

I’ve scoured the Internet for this highly specific information and came up empty-handed.

The second point is that everyone SHOULD have the radon levels in their homes tested!

If the reading is at least 4.0 piCL, the EPA strongly recommends radon mitigation.

Alex Little, MD, trained in general and thoracic surgery at the Johns Hopkins University School of Medicine; has been active in national thoracic surgical societies as a speaker and participant, and served as president of the American College of Chest Physicians. He’s the author of “Cracking Chests: How Thoracic Surgery Got from Rocks to Sticks,” available on Amazon.