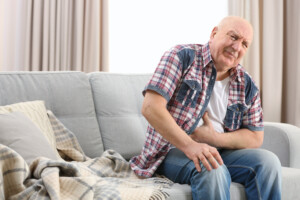 You aren’t supposed to have nausea before a bowel movement. This is not normal.

Though the fecal contents may be causing mechanical pressure resulting in the biting pain of “having to go really bad,” there still should not be any nausea with it.

“Nausea is a very nonspecific symptom which may or may not be indicative of an abnormality with the gastrointestinal tract,” says Dr. Neil Sengupta, MD, a general gastroenterologist and assistant professor at the University of Chicago, and GI Research Foundation Scholars Award Recipient.

“If the nausea is associated with abdominal cramping or pain, and if these symptoms are relieved after a bowel movement, this may be consistent with irritable bowel syndrome.

“This is particularly true if there is a significant alteration in bowel movements.”

There is another disorder that can cause nausea right before a bowel movement – and it is frequently misdiagnosed as IBS: microscopic colitis.

Microscopic colitis is diagnosed only via a colonoscopy. This benign inflammatory bowel disease can be persistent or have a come-and-go nature – sometimes flaring up only very occasionally in some patients.

This condition is characterized by sudden urges of diarrhea that come out of the blue.

This may be preceded by mild nausea (and often cramps) that vanish once the voiding of the messy diarrhea is complete.

Unlike IBS, the urgency of MC’s diarrhea can occur in the middle of the night, such as at 2 am or 5 am.

If you have recurring nausea preceding your pooping, this isn’t always either IBS or MC.

Nor is it caused by diet, smoking, drinking, obesity or lack of exercise. In short, there is no quick fix like a change in diet or taking nutritional supplements.

Dr. Sengupta explains, “Nausea associated with upper abdominal discomfort may be consistent with pathology in the upper gastrointestinal tract, including conditions such as ulcer disease or dyspepsia [acid reflux].”

If the nausea occurs only rarely, and there are no other worrisome symptoms, you may have IBS, microscopic colitis (if you’re having a lot of watery diarrhea), or perhaps your stomach “isn’t agreeing” with something you ate earlier.

Whether you also have cramping, you should see a gastroenterologist to learn why you’re having the nausea.