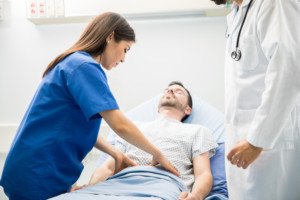 The symptom pair of constant loud stomach noises with severe cramping can be caused by one of multiple different diseases, including a very serious one.

The thing about loud or noisy stomach sounds is that usually they are caused by hunger or gas from certain foods.

But when you toss painful abdominal cramps into the equation, the possible causes change course.

The first possible cause – and this is quite benign – is bacterial overgrowth of the small intestine.

“This occurs when the normal colonic bacteria moves higher up into the small intestine and produces increases in small bowel gases which can cause bloating, cramps and a noisy bowel,” explains Dr. Edward Brettholz, MD, with Concorde Gastroenterology, who is board certified in both internal medicine and gastroenterology and is Clinical Assistant Professor of Medicine, NYU School of Medicine.

A second possible cause of the symptom duo of loud stomach sounds with bad cramps is a food intolerance that leads to malabsorption.

“Some patients cannot digest lactose, fructose or sucrose sugars, and those sugars are then not absorbed through the intestinal lining,” says Dr. Brettholz.

“Instead, those sugars are presented to the colonic bacteria where they are fermented and gas is produced.

“The gas makes noises as it passes through the bowel, and cramps occur due to stretching of the bowel.

“Celiac disease (gluten enteropathy) can also cause cramps and rumbling due to increases in gasses as noted above, but there might also be small bowel damage due to gluten.”

Celiac disease has gotten a lot more attention over the past decade, but here’s something that very few people know: In about half the cases of celiac disease, there are no symptoms during earlier stages.

This is known because many asymptomatic people will get tested for this condition (and will test positive) because a family member is diagnosed.

In this autoimmune disorder, the body “thinks” gluten is a foreign invader and hence, mounts an attack, as it would if the gluten were a dangerous virus.

These repeated attacks damage the small intestine, causing malabsorption which can then eventually lead to a number of conditions including brittle bone disease.

“All humans have a hard time digesting sugars in legumes and some other vegetables (e.g., cabbage, Brussels sprouts) and therefore have increases in gas after eating these vegetables, sometimes associated with cramps,” adds Dr. Brettholz.

Another potential culprit is infectious gastroenteritis.

“This is due to an infectious agent (e.g., viral or bacterial, or a parasite such as Giardia) and can cause cramps and rumbling due to hyperactivity of the gut and rapid movement of gasses and fluids.”

Another possible cause is the most serious of them: a bowel obstruction.

“This is associated with abdominal distention [expansion],” says Dr. Brettholz. The increased girth may not even be noticeable if the person is already overweight.

“Cramps occur as the bowel contracts and tries to push gas and food products past the obstruction, and there is often nausea and vomiting with bowel obstruction.

“There are many causes of bowel obstruction including polyps, cancer, adhesions (scar tissue from previous abdominal surgery) and inflammatory bowel disease such as Crohn’s disease.”

If you believe that your loud stomach noises and abdominal cramps come as a team, you definitely should see a gastroenterologist.

However, the odds of the symptom pair being caused by cancer – especially in the absence of other symptoms like blood in the stools or unexplained weight loss – are small.

Dr. Brettholz lectures extensively and is involved in cutting edge research trials. He has a special interest and expertise in liver diseases, GERD, inflammatory bowel disease and hemorrhoid treatment.