If Your Baby Won’t Look at You Does this Mean Autism? 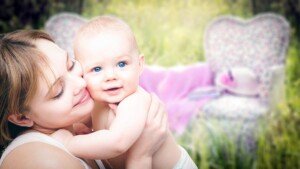 If your infant does not look at you, this may or may not be a sign of autism.

Let’s put it this way: The answer to “If my baby won’t look at me does this automatically mean autism?” is “No,” says Dr. Lisa Lewis, MD, a board certified pediatrician in Fort Worth, Texas, and author of “Feed the Baby Hummus, Pediatrician-Backed Secrets from Cultures Around the World.”

Dr. Lewis explains, “Poor eye contact is one of many signs of autism. In order to be diagnosed with autism, an older child (most commonly a toddler) has to meet the criteria for the diagnosis as described in the DSM-5 from the American Psychiatric Association.”

There is way more to that criteria than fails to maintain eye contact with the parents.

“Many babies who are less than a month of age don’t make good eye contact, as they are learning to use their eye muscles,” continues Dr. Lewis.

“However, some babies don’t make good eye contact early on for no obvious reason.

“Autism cannot be ruled out if a child makes poor eye contact. On the other hand, many children with excellent eye contact are diagnosed with autism.”

In short, you should not diagnose your infant with autism based on eye contact.

But the older a baby gets (growing into toddler-hood and preschool age), the more relevant lack of eye contact becomes – and the more predictive it is for a diagnosis of autism spectrum disorder (ASD).

The title of the paper is “Attention to Eyes is Present But in Decline in 2-6 Month-Olds Later Diagnosed with Autism,” and appears in the journal Nature (Dec. 2013).

The study authors initially believed that in infants later diagnosed with ASD, their eye contact issues would be present at birth and decline from that point forward.

But they found that eye contact from newborn to two months is not diminished in those who later are diagnosed with autism.

In fact, eye contact in those later diagnosed is normal from birth to two months.

The decline was shown to begin between two and six months for babies who were eventually diagnosed with ASD.

As the future autistic babies grew beyond six months, their eye contact lessened even more.

The babies who did not develop ASD improved their eye contact between two and six months, and forged ahead with this until about nine months, at which point their gaze remained the same going into the toddler years.

The study was extensive but involved only 110 subjects. One cannot say with certainty that any given infant between two and six months, who does not maintain good eye contact with family members, will go on to be diagnosed with ASD.

And one cannot say with 100 percent certainty that a baby with good eye contact between two and six months will never develop ASD.

Overstimulation. Too much eye contact during a play session can become overwhelming to the point where the infant just decides to glance away from your big eyes – just to take a break.

The parent will be tempted to regain the eye contact, which will further overstimulate the baby. Give it a rest and try again after the baby has had some downtime.

Short attention span. This can be a cause, but would not explain why poor eye contact is becoming increasingly longer and more frequent.

Sleepiness or hunger. Make sure the infant is alert, well-rested and well-fed before trying to engage their eyes.

Introversion. If your infant loves looking at you and other family members, but they immediately look away around new faces, don’t take this to mean autism.

Natural introversion is a type of temperament. It’s a built-in safety feature, a baby’s primal instinct to avoid that which is unfamiliar and spooky (big strangers hovering over them). Do not stress over this.

Think of the opposite: a baby who immediately locks on to any stranger, and as a young child, is easily captivated by complete strangers.

What if one of those strangers is a pedophile? Think of how easy it would be for the predator to lure this extroverted child into his car or into the woods…

If after six months your baby’s eye contact is declining with you and other close people in his or her life, it’s time for an evaluation to see if a vision problem, or autism spectrum disorder, might be a cause.