Why Do Infants Sleep with Their Butts Up in the Air? 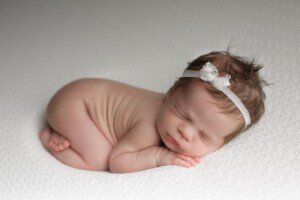 Why do infants’ butts stick up while they sleep on their stomach, being that this peculiar position would be impossible for any adult or even toddler to sleep through?

“Babies sleep with their butts in the air because they like the comfort of tucking their legs under their body,” says Dr. Lisa Lewis, MD, a board certified pediatrician in Fort Worth, Texas, and author of “Feed the Baby Hummus, Pediatrician-Backed Secrets from Cultures Around the World.”

“Sleeping with the butt up simulates the womb position,” continues Dr. Lewis. “Baby had a curled-up position in the uterus, which was secure and peaceful.

“A baby’s muscles may feel ‘tight’ early on from the prolonged comfort womb position.

“As they grow, their arms and legs will stretch and they will gradually grow out of this position.

“Between ages six and nine months, as babies get more mobile, they may also fall asleep in a ‘near crawl’ position with the butt up.”

Take a look at infants sleeping on their stomach with their butts up in the air. It’s also easy to explain this position simply with this motto: “Because they can.”

An infant’s head is only one-fourth the length of their body. An adult’s is one-eighth.

However, just as striking is the length of an infant’s legs, relative to their torso.

Their legs are virtually stubs when compared to the torso. The little, and very flexible, stubs can easily fold under the pelvis and allow the baby to sleep on their stomach with their butt sticking up.

If a baby had such proportions, the infant would not be able to tuck or fold their legs under them so comfortably.

Try doing that: Get on your bed and try to mimic the position of a sleeping baby with its butt in the air.

Get your legs under your pelvis and lay the side of your face to the bed.

Your legs will be way too long to crowd under you. Even a gymnast would find trying to mimic this common infant position impossible.

It’s not so much an issue of flexibility as it is leg length relative to torso length. Even the most flexible yogis don’t sleep this way.

Unfortunately, as comforting as this position is to an infant, the memories of sleeping this way will never be retained, since our infant memories get forever lost as the brain develops.

If your infant naturally gravitates to tucking their legs under them with their butt up in the air, just let them be, as this is perfectly normal and will be gone before you know it.

Dr. Lewis has been a practicing pediatrician for over 20 years. She completed her pediatrics residency at Texas A&M University Health Science Center, Scott and White Memorial Hospital where she served as chief resident.