Why Does Ovarian Cancer Cause Frequent Urination? 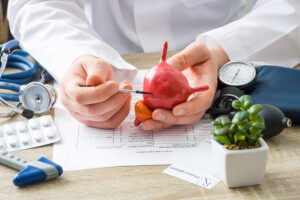 “Frequent urination and the feeling of having to urinate are two of the symptoms most commonly reported in women with advanced stages of ovarian cancer,” says Robin Cohen, former oncology RN and currently the CEO and co-founder of the Sandy Rollman Ovarian Cancer Foundation.

A number of conditions can cause either frequent urination or a frequent feeling that one needs to void, even though nothing actually comes out.

These symptoms should not be ignored. The cause needs to be investigated.

Of course, advanced ovarian cancer is one possible cause. But just why is this?

Cohen adds, “Typically, it is caused by a mass pressing against the bladder, causing the feeling of having to go to the bathroom frequently.”

However, this does not increase the total urinary output or volume come end of day.

The frequency of the bathroom trips is caused by the sensation of a full bladder, rather than a higher than normal volume of urine sitting in the bladder.

A woman with ovarian cancer will find that despite frequent trips to the toilet, her total urinary output isn’t much more than it has always been, relative to the number of all those trips — and in fact, there may be times when nothing comes out despite the urge to urinate.

Again, it’s the tumor pressing against the bladder that causes this sensation.

Urine is produced by the kidneys. Ovarian cancer does not make the kidneys produce more urine. A diuretic or “water pill” does.

The urge to void in the absence of a corresponding volume of urine can also be caused (and far more commonly) by a urinary tract infection.