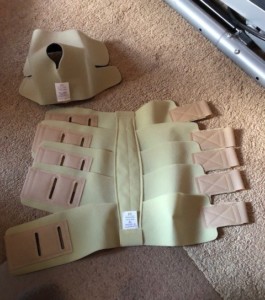 Do NOT buy the Sigvaris Comprefit compression sock with wraps or you will totally waste your money. This product was a sorry disappointment for an elderly man with edema in both legs.

The site that I purchased the product from is ameswalker.com. The way the product is shown on their site gives the illusion that you will be purchasing TWO compression socks.

After all, don’t most people with edema related to chronic disease have it in BOTH legs ?

So I was very disappointed that only one sock came, and oddly it came with TWO leg liners. I thought for $112 I’d be getting TWO compression socks!

That aside, the Sigvaris Comprefit compression sock was a total failure. To get it on and fasten the wraps requires a degree of physical mobility many of the very people who need this type of product DO NOT HAVE!

I bought the product for my very elderly father who has bilateral lower leg edema due to chronic heart failure.

He also (like many elderly) has low back problems that make it very difficult to reach down to his feet, let alone sustain this position.

Hoisting his leg up on a chair would not have made things easier because he’d still have to lean forward to put the product on and fasten it.

After struggling to get the Sigvaris Comprefit compression sock on, he gave up, winded and back hurting.

The makers of this absurd design must assume that people sick enough to have chronic edema are, strangely, fit enough to sustain a bent-over position to get the product, which includes a separate “boot,” on their leg. Just brilliant reasoning!

I tried to put the product on my father’s leg. The printed instructions were of no help.

Imagine an elderly person living alone trying to read the tiny print instructions while attempting to strap up the sock.

I certainly didn’t want to be trying to read while strapping, and figured that unless this is building a rocket, we should be able to just LOOK at the Velcro straps and slits and figure it out.

I ended up fastening them, but the whole thing looked wrong.

The sock didn’t fit right, even though it was clearly the right size. But it did not have a form fit to his leg, and the straps were not smoothly contoured to the curvature of his leg.

There were many air pockets between it and the leg liner that he had put on prior.

I struggled trying to figure out how to finagle with the slits and straps, and we just couldn’t figure it out.

I might add that my father has always been skilled in the area of DIY house projects, and when I was a child, he had literally built an enclosed deck onto our house.

He’s the guy who could “fix anything” in a house, yet could not figure out how to put on this inferior product by Sigvaris Medical.

Now you might say that we should have simply studied the instructions, but they are not written well, and in small print, which maybe to a young caretaker might not be a problem, but again – many elderly people live alone or don’t have a handy young caregiver. The Sigvaris Comprefit is NOT user friendly.

My father uses a computer and smartphone apps, so I certainly don’t think his problem with the Sigvaris Comprefit is related to an old brain.

And I monkeyed around with them for a while, and I’m certainly no dimwit myself, being a college graduate and highly successful entrepreneur.

Yet between the two of us, we couldn’t correctly strap on a compression sock. Something’s not right here. Blame the manufacturer, Sigvaris.

But don’t forget the other issue: The way the slits and straps are designed requires the wearer to SUSTAIN a very bent-over position to put the sock on.

Yes, there are very old people who are limber and would have no problem doing this. I also wonder how many of them are sick enough to have chronic bilateral edema!

After 15 minutes of struggling with the Sigvaris Comprefit jumble of slits and straps, we gave up.

Sigvaris Medical fails to realize that a person who can’t put on a traditional compression sock obviously has musculoskeletal limitations.

Yet the Sigvaris Comprefit was more difficult to get in place than a traditional compression sock.

In fact, we were UNABLE to get it in place. It was loose and lumpy and did not contour to my father’s leg. It wasn’t an issue of being too big in size. I could clearly see that its DESIGN was bad.

For Pete’s sake, if an elderly person is able to reach down and sustain that position long enough to put on the sock and strap it up correctly, then they don’t need a compression sock with Velcro straps. Duhhh.

Do NOT waste your money on the Sigvaris Medical compression sock for edema.

The Velcro straps should have been designed to simply be pulled across the shin to the other side and simply stuck (pressed onto) a receiving Velcro patch. The concept of multiple slits is just plain stupid.