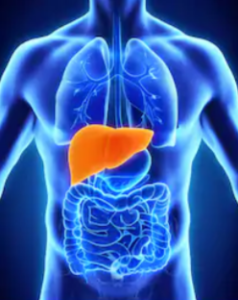 In acute liver failure (hypoxic or ischemic liver) that’s caused by chronic heart failure, the damage to the liver is not intrinsic to the organ but rather, the result of chronically poor blood flow.

An intrinsic problem might be a blood clot in the liver, toxicity from drugs, poison from mushrooms or a viral infection.

But a structurally normal liver can suffer injury over time from reduced blood flow due to a weakly pumping heart.

Poor blood flow to an organ is called hypoperfusion. In chronic heart failure it’s the kidneys that usually show signs of poor function (via the creatinine blood test).

Normally, cardiologists do not wonder how the liver is doing in chronic heart failure patients; they are more concerned about the kidneys because these much smaller organs are more likely to suffer insufficiency due to hypoperfusion.

But it happens every so often that in some chronic heart failure patients, their kidneys, though insufficient, are stable over years, but suddenly their liver crashes.

The aged weak liver has finally given up the good fight against years of hypoperfusion.

When this happens, is this acute liver failure—especially in a very elderly patient—always terminal?

After all, how do you fix hypoxic liver in this case? Double the heart’s ejection fraction with a safe pill? This medical technology is nowhere in sight.

“Acute liver failure is used to described a severe form of acute liver injury that is defined by the presence of certain clinical findings,” begins Daniel Motola, MD, a top board certified gastroenterologist and hepatologist providing same-day and next-day services in NYC with Gotham Medical Associates.

• In some cases the liver enzymes may not be as high as expected, while the other two clinical findings are clearly in place.

Dr. Motola continues, “The term ‘acute liver failure’ is used to describe the above findings in someone without cirrhosis or known pre-existing liver disease (usually not known for <26 weeks).

“Acute liver failure is not universally fatal; close to half or more of patients will survive without the need for a liver transplantation, provided the underlying cause is treated.”

And therein lies the problem: underlying cause. If it’s chronic heart failure in an elderly person, the only way to remedy this is to give a pill that magically causes the heart to de-age and be as fit as it was many years ago.

Though cardiac function is considered “improved” when a diuretic drug removes fluid around the heart, this isn’t improvement per se, but rather, removal of something harmful to the heart (surrounding fluid).

Yet this procedure is sometimes deemed “improves cardiac function.” That’s like saying removal of a heavy backpack from the back of someone with severe spinal stenosis improves spinal function.

“If a person has acute liver failure from heart failure, which results in low perfusion state, the failure could be terminal if the heart failure is not treated,” says Dr. Motola.

Heart failure can result from factors other than an old heart getting weaker over time. It can be caused by a heart attack or a viral infection.

In the case of an elderly person whose heart has been declining with time, there is nothing that can rejuvenate this old weak heart with a very poor ejection fraction (amount of blood pumped with each beat).

If you are interested in a consultation with one of Gotham Medical Associates’ gastroenterologists please call 212-227-3688 or book online. Our staff will be happy to assist you, your family member or friend.