Can Insulin Resistance from Poor Sleep Be Reversed Easily ? 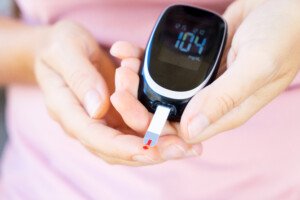 Poor sleep can lead to insulin resistance, which is a progenitor of type 2 diabetes.

There are several things you can do to reverse insulin resistance that’s caused by or made worse by poor sleep—as well as influenced by other factors.

It means the body loses its sensitivity to the hormone insulin. When this happens, more insulin is required (supplied by the pancreas) to bring down blood sugar.

The pancreas should not be pumping out high amounts of insulin to get this job done. Only smaller amounts should suffice – in which case, this would be “insulin non-resistance.”

If you have insulin resistance, you’re in trouble. However, this doesn’t mean that the fix isn’t easily possible.

Dr. Doyle continues, “First, get more sleep. But also, recognize that your insulin resistance is probably not TOTALLY due to your sleep patterns. Your poor sleep could be caused by sleep apnea, which is usually due to being overweight or obese.”

 For instance, a skinny 30-year-old woman can have obstructive sleep apnea due to a combination of large tongue base and surplus pharyngeal tissue.

 A thin person could also have a naturally large uvula (that punching bag shaped thing in the back of the throat) that causes obstruction during sleep.

 Not all people with untreated sleep apnea snore.

 Many people with untreated OSA unknowingly compensate during the day and thus, have no idea they have this condition. For example, “I don’t easily fall asleep watching TV because I combine TV viewing with housework to stay alert.”

 Untreated sleep apnea is a well-established risk factor and even causative agent for insulin resistance and type 2 diabetes.

Other Contributors of Insulin Resistance

Dr. Doyle says, “Your diet also likely plays a role as well. If you are not eating enough unprocessed fruits and vegetables and eating too much meat and processed foods, then you are likely to develop insulin resistance.”

One of the body’s responses to a perceived threat (whether it’s a charging rhino or workplace hostility) is to dump sugar into the bloodstream for a ready source of fuel to carry out the fight or flight.

But with modern day chronic anxiety, the fight or escape never comes to use up the extra sugar. So the surplus blood sugar remains: chronic insulin resistance.

Lousy sleep makes this worse, whether it’s caused by OSA or anxiety.