Why Do People Think Nutella Is So Healthy? 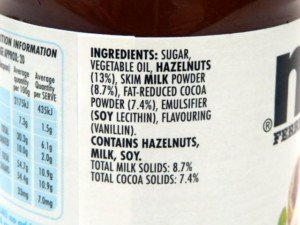 Think of Nutella as spreadable candy, and you won’t think it’s so healthy.

Since when is sugar in spreadable form good for you? Because it contains hazelnuts and cocoa?

The first ingredient in Nutella is sugar!

My sister-in-law was talking to me one day about giving her kids healthy foods, and sure enough, Nutella came up.

She must have gotten the idea that Nutella is nutritious after seeing ads for it that paint it as a health food.

The next ingredient by weight is vegetable oil. Not olive oil or coconut oil (healthy oils), but vegetable oil (palm).

It’s a cheap way to make Nutella spreadable on bread and prolong its shelf life.

Nutella does not have artificial dyes, preservatives or high fructose corn syrup. But this doesn’t make it good for the body. Being low in sodium doesn’t make Nutella good either.

All it takes is a whopping amount of sugar to disqualify a food from being healthy for the body. 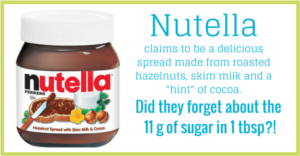 Reasons Nutella Is Thought of As a “Healthy” Food

“This is a concept that I find so interesting because Nutella is sometimes touted as a health food,” says Shana Spence, MS, RDN, CDN, a registered dietitian nutritionist based in New York.

“Some people think that because it’s a hazelnut ‘spread’ it’s like other nut butters and should be healthy.

“Normally yes, this should be the case because nut butters [without added sugar] are a healthy option.

“However, Nutella is made from a ton of added sugar. The first ingredient listed is sugar! That alone should be the giveaway that this is definitely not the best choice.

“This spread has 21 grams of sugar per serving which is equal to about five teaspoons of sugar!”

Nutella’s nutrition label names only two tablespoons as a single serving. If you really love this stuff on, say, a bagel, you’re going to smear on a LOT more than two tablespoons.

Spence continues, “Nutella comes from Italy which is known for having some of the healthiest foods and lifestyles.

“The Mediterranean diet is now having a moment, so oftentimes people associate ALL foods that come from that region as being healthy.

“The words no artificial flavors and preservatives are used. To some people this is associated as being overall healthy, and they often think of something being ‘natural.’”

The absence of fake flavors and preservatives does not negate the sugar and “bad” oil content in Nutella.

Look, if you love Nutella, keep eating it, but from now on, you should realize it for what it is: spreadable candy.

Treat it like candy: Eat it occasionally. If you haven’t introduced it to your children, don’t. They’ll eventually get old enough to learn about it. There’s no rush for them to consume yet one more form of sugary candy.

If your kids have already been eating this stuff, then serve it to them with the discretion you use when giving them a donut or icecream cone.