Teaching Your Child to Refuse Candy from Strangers 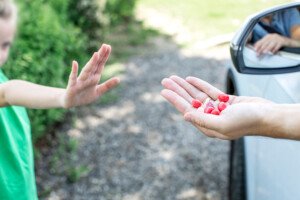 Pedophiles often use candy to lure their child victims. Here’s how to teach young children to refuse candy being offered by a “nice” stranger!

A predator with half a brain will always have a bag of candy on him.

When teaching your child never to accept candy from a stranger, you should avoid the following mistakes.

Threats won’t work, such as, “If I ever find out you took candy from a stranger, I’m gonna (fill in the blank)!”

“Attempting to use a fear factor will only cause the child to be afraid of the parent, not the stranger,” says Dr. Shani Verschleiser, Founder and CEO of Magenu, a non-profit organization that creates and implements educational curriculums dedicated to empowering children in personal safety and awareness.

“It will also make sure that a child will never tell you if they actually are in a situation that is questionable or if they need help.”

In fact, most predators will use the tactics of telling children to keep secrets because their parents will be really mad at them, and these types of [threatening] comments [from the parents] reinforce to the child that the predator is telling the truth.

“In addition, giving a child this kind of statement doesn’t explain anything to the child in terms of what danger they are exposing themselves to.

“It only allows them to feel danger from their parent, which means if they feel they can ‘get away with it,’ and the parent will never find out, then they would still take the candy.”

“If you take candy from strangers, you’ll get fat!”

This tactic focuses on self-esteem, not the dangers of taking candy from strangers, says Dr. Verschleiser.

“A child who is told this comment really has no basis for why the stranger is dangerous; only that they are at fault if they eat the candy.

“In addition, if the child actually answers, ‘I can’t eat the candy because it will make me fat,’ as per the parent, the stranger can then just respond with, ‘Not this kind of candy,’ or, ‘It’s healthy candy,” or, ‘It’s low fat,’ etc. And then guess what: The child will be prone to taking candy from this crafty stranger!”

Tactics for Teaching Children not to Take Candy from Strangers

#1. Ask your child point-blank, “What would you do if someone you didn’t know offered you candy?” Include specifics (e.g., a man approaches you on the sidewalk. Hear out the response.

#2. If the response is “I’d take the candy,” or it’s vague, follow up with the question below.

#3. Ask, “Do you find it odd that a stranger would just come up to you out of the blue and offer you candy?” Then listen to the answer.

#4. Explain why it’s really bizarre, and hence, extremely suspicious, that a stranger would offer a child candy. Don’t just say, “A well-meaning stranger wouldn’t do that.” Explain WHY.

If you believe your child is old enough to be out and about alone (walking to a friend’s house, riding a bike in the neighborhood, etc.), then they’re old enough to be told about pedophiles, and that the next stranger who offers them candy may be a pedophile.

The child is apt to conclude, “Gee, that would be weird, a stranger picking me off the street randomly and wanting to give me candy!” This realization will strengthen the stranger danger radar.

#6. Explain, “You can never want candy bad enough that you’d take it from a stranger, when instead you can ask me for candy.

“If you think I’ll say no, ask anyways, because you know that eventually I’ll give you candy.

“If you’re tempted by a stranger’s offering, ask yourself if you want it badly enough to risk being abducted.

“If you want it that bad, run in the opposite direction and tell me what just happened.”

#7. Ask your child to tell you why they think a well-meaning stranger would require them to get into his car to have the candy. Again, this will force analysis.

#8. Ask why a well-meaning stranger wouldn’t first get permission from the parents. This will force analysis.

#9. Include role-playing in a variety of scenarios, using your kid’s favorite candy as a prop.

#10. Arrange for a trusted male friend, whom your child does not know, to pose as a predator and approach when you know the child will be alone.

Have your friend report to you what happened when this “stranger” offered your child candy, and discuss this with your child.

If you learn he or she took the offer, Dr. Verschleiser suggests the following:

“The candy lure by strangers needs to be combatted with the rule of never taking anything from anybody unless you okay it first.

“This applies to non-strangers as well because it happens to be a stage in the grooming process of predators.

“If you tell a child you can never take a present/candy, etc., from anyone including your brother/cousin/uncle, etc., without asking (me) first, then the rule applies to strangers as a given.”

Dr. Verschleiser is a mother of three and is on a mission to educate teachers, parents and children about the topics of safety.