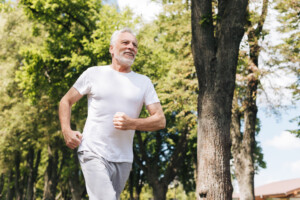 Esophageal cancer has a very poor prognosis; certainly there HAS to be a way of lowering the risk: could exercise be one?

A meta-analysis of four studies shows an association between a reduced risk of esophageal cancer and exercise.

This can arise from a condition called Barrett’s esophagus, which can spring from chronic gastroesophageal reflux disease.

The overall risk reduction was 19 percent in the most physically active subjects, compared to the least active.

The Connection Between Exercise & Esophageal Cancer

One way that working out may have a reduced effect on the development of esophageal cancer is by reducing the incidence of obesity, which has been implicated as a risk factor for the disease, says Dr. Singh in his report.

The Issue of Cause and Effect vs. Association

“I’m a believer in the benefits of exercise, but Singh’s meta-analysis doesn’t convince me that it’s the exercise that reduces this particular risk,” says Alex Little, MD, a thoracic surgeon with a special interest in esophageal and lung cancer, and clinical professor at the University of Arizona.

“His study looked at the association between the two; not the same as cause and effect.

“Although he identifies some ways in which exercise could cut the risk, it’s also possible that people inclined to exercise are born with good genes and/or immune systems, have better nutrition or a lifestyle that reduces the risk — and they would have this benefit even if they were prevented from exercising.

“None-the-less, I’m for regular exercise for all the reasons a personal trainer would know.”