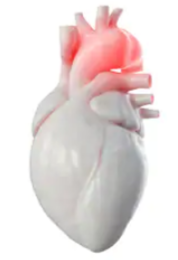 Since the Cozaar drug significantly shrinks rate of aortic aneurysm growth in Marfan’s patients, how well could it work for patients who do not have Marfan syndrome?

An aortic aneurysm is an abnormal enlargement of a portion of the aorta.

Though this potentially fatal feature is common in Marfan’s syndrome patients, it can also occur people without this genetic condition.

“Cozaar (losartan) is in the category of angiotensin receptor blocker used for hypertension,” says Michael Fiocco, MD, Chief of Open Heart Surgery at Union Memorial Hospital in Baltimore, Maryland, one of the nation’s top 50 heart hospitals.

“It has been found to blunt the effects of a protein that likely leads to aortic dilatation specifically in Marfan’s patients,” says Dr. Fiocco.

“This protein has not been found to be causative in other types of aortic aneurysms, i.e., atherosclerotic, aortopathy associated with bicuspid valves, etc. The research is ongoing.”

In the meantime, those with Marfan syndrome need to know about Cozaar.

Reducing the rate of aneurysm enlargement is not the same as shrinking these ballooned areas of the aorta.

A study showed that the rate of aneurysm growth in Marfan’s patients, after three years of treatment with Cozaar, was significantly reduced when compared to Marfan’s patients who were not given this drug.

The lead researcher of the Amsterdam-based study was Maarten Groenink, MD.

Marfan’s syndrome affects connective tissue. In many patients it causes progressive enlargement of the body’s largest blood vessel, the aorta.

As the aorta gets bigger (think a balloon expanding as it fills with air), its walls get weaker (the balloon’s walls become so thin that it bursts).

When the aortic walls are thinned out and weakened enough, the aneurysm can rupture or dissect. Death can occur in minutes.

People without Marfan’s syndrome can also have an aortic aneurysm.

How is an aortic aneurysm treated?

Surgical repair is the treatment — when the enlargement reaches a critical size — to prevent a rupture.

Otherwise, a surveillance approach is used, combined with medication to prevent high blood pressure, and restrictions on lifting weight.

There are no known drugs that can outright shrink an aortic aneurysm, and besides, shrinking the enlarged portion of the vessel wouldn’t necessarily mean that the walls would regain their original strength and durability.

The Amsterdam study showed that in patients who received Cozaar, the increase in aortic root enlargement over three years was 0.77 mm; in the control group it was 1.35 mm.

These are striking results that show that the drug Cozaar has an inhibiting effect on the rate of aortic aneurysm growth in Marfan’s patients.

Hopefully, this research will continue and include non-Marfan’s patients with this condition.

NOTE: These results pertain only to enlargement of the “root” of the aorta, the area in Marfan’s that’s usually affected.

The study revealed that the drug did not significantly reduce growth rate of aneurysms elsewhere in the thoracic aorta.