Should Little People Hold Onto a Treadmill when Walking? 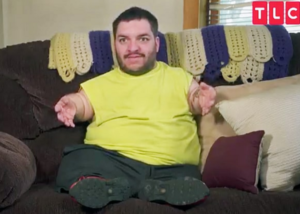 Even if you’re a “little person” you should NOT hold onto a treadmill when walking. The stature of a little person makes holding on even more harmful.

“Big and Little” is a new show on TLC about morbidly obese little people (dwarfs).

Trainer Allison told Chuck he could hold onto the treadmill when walking as she was leading him to the machine. Chuck walks without assistance in everyday life, though it’s more of a waddle. But he gets around fine.

So he steps onto the treadmill and once the machine gets going, he holds on – to the front bar.

Being a little person at only 3’6”, Chuck looked quite uncomfortable holding onto the treadmill. His hands were ABOVE the level of his head, arms outstretched. His entire body was lurched forward.

Chuck’s type of dwarfism is different from that of Amy and Zach Roloff of “Little People, Big World.”

He has a normal length torso but remarkably short arms and legs. His legs are so short that if he’s sitting on the floor, he can rock forward on his stub-like legs to a standing position. Likewise, his arms are markedly short for his torso/height.

So in order to hold onto the front bar, he was forced to walk while leaning forward in what appeared to be a very uncomfortable gait.

I’m wondering if Chuck persisted in holding on simply because the suggestion had been put into his head by Allison.

Maybe it didn’t occur to him that the walking would be easier if he moved his arms at his side the way he does when he walks around anywhere else.

In another, though very brief, shot of Chuck on the treadmill, he was walking without holding on. His gait looked LESS strained.

As a former personal trainer, let me tell you that little people should not hold onto a treadmill any more than should non-little people.

The irony is that Allison arranged for Chuck to take Brazilian jiu-jitsu lessons for their aerobic benefit. There was footage of him trotting around the classroom with other students for the warm-up.

This little person was TROTTING without assistance! Why did he need to hold onto a treadmill?

As for Ayanna, there was a brief clip of her walking on a treadmill without holding on. At 3’9” and 215, she’s a morbidly obese little person with 50 percent body fat, according to a formal assessment.

Imagine for a moment just how unnatural a little person’s gait would be, how thrown-off it would be, if they were holding onto a treadmill – be it the front bar or rails.

Due to their height, they’d be walking while keeping their arms in an ongoing state of reaching up.

This is no way to walk; it’s very removed from natural biomechanics and can result in a repetitive stress injury to the shoulders, hips and even the feet.

Able-bodied people of all sizes including “little” walk around in the real world without holding onto anything for support.

If they hold onto a treadmill, they will be performing BELOW their baseline and will not get results.