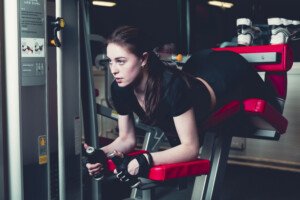 There are a few ways you can tweak the way you do hamstring curls, that will yield better and faster results, be they fat burning, stronger legs or rock-hard hams.

First of all, rule No. 1, is that when you lower the weight during hamstring curls, don’t let it drop or fall back down.

Lower the weight with control (the “negative” phase).
The negative is 50 percent of the hamstring curl routine. In fact, it is during the negative that most of the micro-tears occur in the muscle fibers.

Muscle must be broken down in this way so that it can build back up stronger (and bigger, if that’s your goal).

Next, when lowering the weight with control during hamstring curls, DO NOT LIFT YOUR CHEST OFF THE BENCH.

Your chest might already be a little separated from the bench, and that’s fine. But keep it that way instead of raising up further as you lower the weight.

Some men literally rock up and down when doing hamstring curls, completely skipping a true negative phase.

As they lift their chest up, the weight lowers, and this pretty much cancels out the negative half of the muscle contraction.

Translation: CHEATING. Keep your chest against the bench as much as possible, though a slight separation is fine.

Another thing I see often with the lying hamstring curl is that both men and women fail to bring the pad all the way to their buttocks. Instead, the pad is curled incompletely.

Even at very heavy weights, the pad can be brought all the way to the buttocks, making contact with it. This completes the range of motion.

As you progress through a heavy set, it may become impossible to bring the pad all the way to your buttocks, and that’s fine. At least make contact with the buttocks early on in the set.

For lighter weight loads, remember to bring the pad in contact with your buttocks for every repetition, for a complete range of motion, to recruit as much of the hamstrings as possible.