Can ALS Cause Hand Symptoms that Mimic Carpal Tunnel Syndrome? 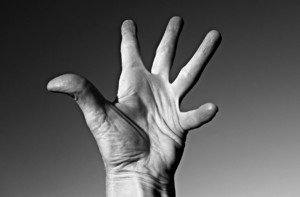 Unfortunately, early symptoms of ALS can masquerade as symptoms of carpal tunnel syndrome.

If you wait long enough and have ALS, you’ll eventually suffer the progressive symptoms of this neurodegenerative disease.

But in the meantime, the anxiety is ruthless, because the new-onset symptoms of your hand can seemingly swing in either direction: ALS or carpal tunnel syndrome.

“In its early stages [ALS], limb weakness, cramping and muscle fasciculations may be a part of the initial presentation and could be confused with the symptoms of carpal tunnel syndrome,” says Dr. Rue.

“A thorough physical examination can help distinguish the key features of carpal tunnel syndrome from generalized limb weakness and upper motor neuron symptoms of overactive reflexes which characterize ALS, although there may be some overlapping symptoms.”

As mentioned, as time progresses, the symptoms of ALS will also progress and spread to other parts of the body.

If you’ve had hand symptoms (weakness, tingling) for months on end but no spread of any muscle weakness to the arm, there’s a good chance that after these many months, you do not have ALS.

However, why not just see a doctor? Because if it’s carpal tunnel, this needs to be treated, as it may get more painful and troublesome. Conservative treatments can help.

There are tests that a doctor can give you in the office that, depending on how you respond, would strongly point to a diagnosis of carpal tunnel syndrome.

More technically, a neurologist can give you an EMG test of your hand/wrist (nerve conduction study) to determine if you have carpal tunnel syndrome or not. If ALS is suspected in the initial exam, an EMG will be recommended as well.

Results of an EMG for carpal tunnel syndrome will be different than those for ALS.

Dr. Rue specializes in prevention and treatment of sports and exercise injuries. His primary focuses are knee, shoulder and elbow injuries including ACL and cartilage injuries, rotator cuff injuries and overuse tendonitis.