Can You Suddenly Get Carpal Tunnel Syndrome in Both Hands ? 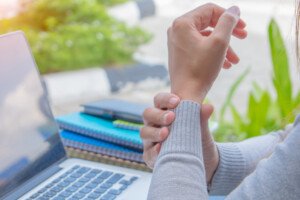 And yes, this can happen: A person can develop sudden-onset carpel tunnel syndrome affecting both hands in a simultaneous fashion.

Possible Causes of Trauma
Dr. Rue explains, “This trauma could be from a fracture or dislocation, burns, infection [which may include muscle aching or fever prior to the CTS], bleeding or from a high-pressure type of injection injury.”

Additional Causes of Sudden Carpal Tunnel in Both Hands

“Swelling from fluid retention in the body, such as during pregnancy, can also cause bilateral carpal tunnel syndrome.

“Diabetics and people with thyroid conditions are also at higher risk for carpal tunnel syndrome.

“In the absence of trauma, the sudden onset of bilateral carpal tunnel syndrome is most likely due to cumulative pressure building up to the point where there is a critical amount of pressure on the median nerve, causing ischemia in the nerve.

“This results in the feeling of pain and numbness associated with carpal tunnel syndrome.

One such tumor that can cause carpal tunnel syndrome (though most likely in one hand and not sudden onset) is called a giant lipoma.

This is a mass of fatty soft tissue. It’s benign and cannot turn into cancer. CTS caused by a giant lipoma is very rare.

A ganglion cyst can also lead to carpal tunnel, though likely this will not be sudden onset and will only be in one hand.

Dr. Rue specializes in prevention and treatment of sports and exercise injuries. His primary focuses are knee, shoulder and elbow injuries including ACL and cartilage injuries, rotator cuff injuries and overuse tendonitis.