What Is the Slowest ALS Can Progress? 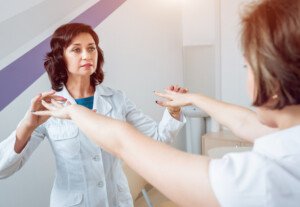 Progression of this fatal disease will vary from one patient to the next.

Regardless of the slowness or rapidity of ALS progression, the general rule is that the progression rate for any given patient is steady.

What seems like a plateau in progression, and then a resurgence of the progression, may actually be an illusion created by a change in function.

For example, the ALS patient may notice a halt in the progression soon after he begins using a wheelchair. The absence of walking, then, masks the continued progression of the disease.

However, in some cases there can indeed be a plateau and then a reoccurrence of progression.

Though the average life expectancy upon diagnosis is two to five years, some patients succumb within six months while others are still alive 20 years later.

The ones who live for many years, such as physicist Stephen Hawking, seem to have reached a plateau in progression and a stabilization of symptoms, but they are the rare exception.

The juvenile-onset version of ALS indeed “progresses very, very, very slowly,” says Leo McCluskey, associate professor of neurology and medical director of the ALS Center at the University of Pennsylvania, in an article at scientificamerican.com.

Dr. McCluskey says that he has patients in their 40s, 50s and 60s who were diagnosed in their teens.

But does this mean that since the onset of their ALS, the progression has been in place, never having stopped, for decades, but so slowly that the patient is still alive after all those years?

Or did the progression burn out at some point, and the patient is holding out for all these years? Dr. McCluskey says in the article that if the motor neurons that “run” the diaphragm are spared in the progression process, patients could “potentially live for a long time, even though you’re getting worse.”

Dr. McCluskey says that these remarkable cases comprise only a few percents of overall cases.

In general, the progression of ALS is rapid, and this would seem the case, being that the average survival at the time of diagnosis is just two to five years.

When the initial onset occurs in the lower limbs, the progression of ALS tends to be slower than if the onset begins in the upper body.