Should You Check for Melanoma if You Have Only a Few Moles ? 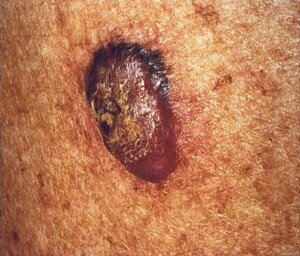 If you have only a few moles, this doesn’t mean you can blow these off & think you’ll never get melanoma.

Even if you have ONE small mole, it can still turn into melanoma.

Just because people with more than 50, and especially over a hundred, moles have an increased risk of melanoma doesn’t mean that having just a few gets you off the hook.

You still have to check them! For one thing, you may have a small number of moles, but you may also have at least one other risk factor, such as blonde hair/blue eyes, or living at high altitude.

So what’s the other thing? You won’t like this: People with a small amount of moles may be diagnosed with a more aggressive melanoma when compared to those with a ton.

This is what Caroline C. Kim, MD, dermatologist and associate director of the cutaneous oncology program at Beth Israel Deaconess Medical Center Department of Dermatology says.

Why are people with only a few moles more likely to be diagnosed with an aggressive melanoma?

A person with a lot of moles is more likely to be vigilant about checking their skin every month and getting annual checkups by a dermatologist. They’re more likely to have an earlier diagnosis.

A late diagnosis is more likely in someone with just two moles—as they are not as concerned.

But does this mean that the cancer is inherently more aggressive? Yes, as you will see coming up.

Dr. Kim’s team discovered in their study that patients with fewer moles had a more aggressive cancer, one that was thicker, than those with many moles.

The over-50 group tended to have less aggressive, thinner tumors. Oddly, these patients also had atypical moles, which is a risk factor for melanoma.

What explains this odd phenomenon?

• The first reason is that someone with many moles, who’s more conscious of these as a result, is more likely to take measures that lead to an early diagnosis—when the tumor is still thinner and less aggressive.

• Secondly, Dr. Kim believes there’s a biological difference in the moles of someone who’s peppered with them and someone who has just a few.

• “It’s possible there are different pathways that drive melanoma in these two patient groups,” says Dr. Kim in the study report, “resulting in different degrees of aggressiveness.”

Dr. Kim points out that more large-scale studies are needed.

If you have only one mole, your surveillance of it should be just as diligent as if you had a hundred.

And here’s another thing: Only one-third of melanomas begin in a pre-existing mole, so even if you have zero, you should still be checking your skin every month.

If you have a ton of moles, especially odd looking ones, you’ll want to consider a very effective screening technology called serial digital dermoscopy.