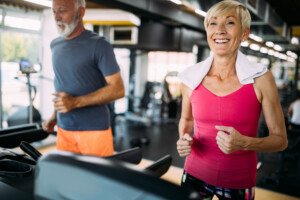 If you want to prevent Alzheimer’s disease, add treadmill walking to your arsenal.

If you prefer outdoor walking, that’s fine, but realize that even a treadmill will help prevent this horrible disease.More and more studies are piling up (e.g., Gow et al, Nigam et al) pointing to the indisputable benefits that different kinds of exercise have on the brain.

The conclusion is that exercise has benefits to cognitive skills in older adults at risk for Alzheimer’s disease (and of course, to those apparently not at risk).

Some older people get MCI: mild cognitive impairment, which is more than just the typical memory loss associated with an aging brain. Those with MCI are at greater risk for Alzheimer’s.

In Dr. Smith’s study, exercise was shown (via functional neuroimaging) to improve memory recall and brain function in those with MCI.

Dr. Smith notes that no study has ever shown that a drug can beat out exercise at improving brain function.

There were two groups of sedentary people 60 to 88. One group had MCI and the other had normal brain function.

However, both groups had improved memory skills and enhanced neural efficiency while performing memory tasks.

The exercise intensity was moderate, meaning, enough to elevate heart rate and induce a sweat, but comfortable enough to allow conversation.

Brain Scans Before and After the Exercise Course

Images and tests were taken before and after the 12-week exercise program and showed remarkable changes in brain activity during memory tasks.

In fact, the brain regions that experienced improved efficiency corresponded to the same regions involved in Alzheimer’s pathology.

These include the temporal lobe, precuneus region and the parahippocampal gyrus.

“People with mild cognitive impairment are on a very sharp decline in their memory function,” explains Dr. Smith, “so being able to improve their recall is a very big step in the right direction.”

Dr. Smith plans on conducting a bigger study with more participants, including healthy people who have a genetic risk for Alzheimer’s disease.

In the meantime, if you’ve neglected the dusty treadmill in your basement or have banished an unused treadmill to the corner of your garage, bring it back to life again — if for no other reason than to help prevent Alzheimer’s disease.

Commit to a walking program on your treadmill. It’s never to late to bring about changes in the brain that can help prevent Alzheimer’s disease.

IMPORTANT: Do NOT hold onto the treadmill even if you’re over 55! This will sabotage your efforts if the holding on is continuous rather than momentarily to sip water.

Of course, the assumption is that you’re able-bodied and normally do not need any assistance with walking in day-to-day life.