Can You Die from an Esophageal Spasm? 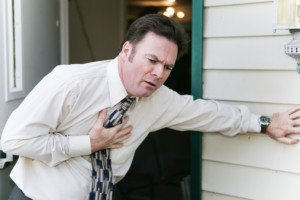 An esophageal spasm can feel just like a heart attack or angina from severely clogged arteries.

The esophagus is the “food pipe” through which food and drink go down.

“Esophageal spasms can be painful,” says J. Mark Anderson, MD, DABFM, of Executive Medicine of Texas and who is board certified in family medicine.

“It comes on quickly, with little warning and can be quite frightening.

“The causes of esophageal spasm can vary, from ingesting spicy or hot food, drinking alcohol, use of certain medications, excessive stress or acid reflux.”

How long can an esophageal spasm last?

A few minutes to a few hours, says mayoclinic.com.

The esophagus is made of muscle, but not the kind of muscle that’s in your biceps or legs, for instance.

But being that it’s muscle tissue, the esophagus has the potential to go into a spasm, and it can be quite painful. 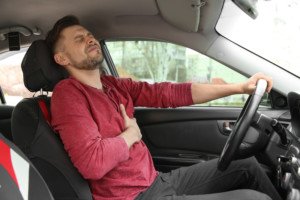 • The chest pain can be intense.

• There may be a squeezing sensation.

• It’s enough to make the patient fear a heart attack in progress and prompt that person to head to the emergency room.

• Doctors cannot distinguish between the chest pain of an esophageal spasm and that of a heart attack based upon the patient’s report of the symptoms.

This is why an ER doctor will order a blood test to check for a heart attack.

• There may be difficulty swallowing liquids.

• A sensation that something is stuck in your throat.

• Regurgitation of food or beverages.

Some people get very frightened when an esophageal spasm hits—not because they fear it might be a heart attack (they may have already had extensive cardiac workups showing a normal heart), but because they think this muscle spasm might kill them.

According to mayoclinic.com, “abnormal functioning of nerves that control the muscles” that you use for swallowing seem to be a cause.

According to the mayoclinic.com section on esophageal spasms, they are not fatal. In fact, there’s not even a “complications” page for this disorder.

The fact that the pain of an esophageal spasm can mimic a heart attack is no reason to believe that such a spasm can be fatal.

Opposing Information on Another Medical Site

However, on the “Prognosis” page for esophageal spasm on the medscape.com site, it states at near the top: The mortality rate is minuscule, but the morbidity rate is high.

Below the first paragraph is a header, Mortality/morbidity. The first line states: Mortality is very rare, but morbidity can be significant.

“Morbidity” means presence of disease. Morbidity can be caused by restriction in eating (e.g., inadequate nutrients) that’s related to the condition.

The last paragraph of this subsection on the page states: Primary esophageal motility disorders rarely progress and are not known to be fatal.

The next subsection, “Complications,” states: Esophageal perforation can occur with esophageal dilatation, leading to admission to the hospital, time lost from work, and possible surgery.

Surgery can result in complications such as perforation, infection and pneumonia—three conditions that the patient can die from.

But these are secondary to the esophageal spasm, so technically, the cause of death would be complications from a surgery.

Dr. Anderson explains, “While esophageal spasms are not fatal, some underlying causes, such as cancer, can be fatal. Keep in mind that esophageal cancer is rare and not one of the common causes of esophageal spasm.”