Percentage of New Moles in Older People that Become Melanoma? 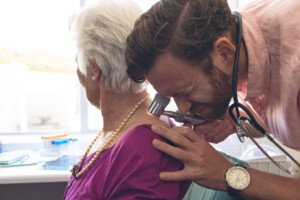 A new mole in an older adult has a higher chance of becoming melanoma.

But do you know what percentage of new moles in people over 50 or even 40 eventually turn into melanoma?

This is an intriguing question, and I posed it to Jennifer Gordon, MD, board certified by the American Board of Dermatology; and practices at Westlake Dermatology located in Austin, Texas.

As a medical writer, I’ve scoured the Internet for information or data on what percentage of new moles in older people or those over 50 actually become a melanoma.

For instance, a 48-year-old discovers a brand new mole on her leg. A dermatologist says it looks benign.

Because this patient is 48, it there a 10 percent chance (or 20 or 30 or 50 or 70 percent) that this new mole will eventually transform into melanoma?

How much does this percentage increase per five-year or one-decade increase in age?

Wow! If ONLY science could be this exact!

Dr. Gordon’s response is coming up, but first, let me tell you that I actually did locate a study that addressed the concept of likelihood of a mole in older age developing into melanoma. The findings will scare you.

Key Features of the Australian Study

• One-third of new moles in older people at high risk (at least one risk factor) for melanoma turned out to be melanoma.

• John Kelly, MD, with The Alfred Hospital, headed the study of 309 patients over a three-year period.

• The patients were age 16 and older.

• New moles in people 50 and older were 30 times more likely to be melanomas when compared to younger patients’ new moles.

• Changes in PRE-EXISTING moles in patients older than 50 were seven times more likely to be melanoma compared to younger patients.

• The report quotes Dr. Kelly as saying: “If you get a new mole you’ve got a one in three chance of it being melanoma if you’re over 50.”

This is very unsettling information.

However, there’s more to it—and it involves an understanding of the math to put things into a more reassuring perspective.

• 309 patients means this was a small study.

• The older patients in this study developed only about one-tenth as many new moles as people under 50. This piece of data right off the bat throws a kink into the chain.

Because of this, there wasn’t a true apples-to-apples comparison of new moles in older and younger people!

• Total number of melanomas diagnosed was ONLY 18 – in 16 patients at that! So these frightening numerical findings were derived from only 16 patients!

• Only three of the 10 new moles that developed in the over 50 group turned out to be melanoma. This is where that “one in three chance of it being melanoma” comes from!

• Where does the “New moles in people 50 and older were 30 times more likely to be melanomas” come from?

Do the math: Three out of 10 new moles in the over 50 were malignant: 30 percent. Only one mole out of the 252 new moles in younger people was a melanoma: one percent.

• Only five of the 23 changing PRE-EXISTING moles in the over 50 group were melanoma, while nine out of the 288 changed pre-existing moles in the younger people were cancerous.

The resulting math from these numbers yields the frightening figures. Would these figures be similar if three MILLION patients were followed? It’s difficult to extrapolate this information.

For all we know, as the amount of people in the same kind of study gets larger, that 30 percent figure might get smaller.

What does Dr. Gordon say?

“I think this is a product of decreasing new nevi [moles] with age and increasing melanoma with age.

“There is no percentage on new moles becoming melanoma that would be meaningful across an entire population. There are too many other factors.

“There is an increase in melanoma with age and a decrease of new nevi with age, so a higher percentage that a new suspicious nevus at an older age is melanoma.

“However, there is not a percentage that encompasses all other factors.”

Conclusion
We know what percentage of new moles in older people (50-plus) become melanoma—when referring to the Australian study of 309 people with above-average risk for this disease.

But we cannot extrapolate the information from this study and apply it to millions of people and hundreds of millions of moles.