Over 50, New Moles? How to Screen for Melanoma even in Obscure Areas 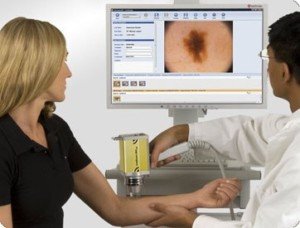 You’re 50-plus & are getting new moles that your doctor says look benign, but you’re worried they might become melanoma.

Here’s a brilliant way to monitor these new moles.

Are you 50 or over and have noticed a few new moles popping up here and there over time?

Let’s assume that your dermatologist has confirmed that these new spots are indeed moles (and not their lookalikes: seborrheic keratoses).

Depending on how many pre-existing moles you have, it can be daunting trying to keep track of all of them, especially when new ones are added to the scene.

What makes this even more vexing is if you have new moles on hard-to-inspect areas like your back.

Sure, you can see these, but you can’t actually inspect them close up for suspicious changes until those changes become more significant.

And by then you can have a stage two melanoma on your hands. Is it possible to catch melanoma in a stage zero status even if it’s on your back?

A lot of change in a mole can take place between annual visits to the dermatologist for routine melanoma screening.

“This is always a difficult consideration – it is always a possibility that you develop a melanoma the day after your annual skin exam,” begins Dr. Jennifer Gordon, board certified by the American Board of Dermatology; she practices at Westlake Dermatology in Austin, Texas.

“We hate to think about that!

“However, if you are at high risk then often dermatologists will check your skin more often than annually. That being said, it can be very hard to watch every mole for both you and your dermatologist.

“My best answer to this is PHOTOGRAPHY! We all have cameras, and many electronic medical record systems allow attachment of photos to patient charts.

“I use this all of the time to monitor for new or changing nevi [moles] in patients and encourage patients to do the same if they have irregular or potentially changing moles.

“However, if there is ever a question and there is some suspicion, I encourage patients to return to the office for a spot check or biopsy.”

If you have a smartphone, there are applications for taking images of your moles over time: serial imaging.

The app can then detect if a particular mole seems to be changing.

These apps are NOT diagnostic tools.

They can only detect a possible change over time in a mole.

Using a smartphone in this fashion has a limitation: trying to capture images of moles in challenging locations, notably your back.

For home serial imaging, you should replicate every image as much as possible:

But what about the back and other challenging locations? There is a solution to this dilemma for those over 50 who are getting new moles:

Any new moles (and pre-existing nevi) on your back and other tricky areas are marked by a nurse who is trained at capturing the images with the state-of-the-art dermoscopy equipment (see image at top of article).

The images of one’s moles are fed into a computer database where they are rated numerically (or sometimes by color).

For example, a rating of below 0.6 means benign, but higher means suspicious. The levels of suspicion will include “biopsy recommended.”

So over a five-year period, for instance, a dermatologist can pull up on the dermoscopy screen a row of five images of the same mole (taken annually) and visually compare (the images are magnified).

In addition the computer will make a comparison and generate a rating relative to previous images. The very first image, of course, will get a rating.

Serial digital dermoscopy is the perfect melanoma screening solution to people over 50 who are unsettled about their new moles.

But this technology does NOT diagnose. It can only yield a rating ranging from benign to very suspicious.