Why Not Prophylactic Removal of New Moles in Older People? 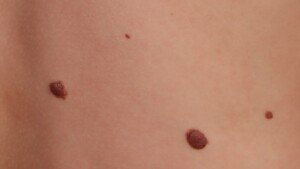 If new moles later in life are concerning, why don’t doctors just remove them to play safe rather than having the patient continuously worry about melanoma?

The thought process of many people is as follows:
Prophylactic removal should be performed on moles that develop later on in life, in older age, because these new moles are at risk for developing into melanoma.

Mole removal of a typical-sized spot takes only minutes, and the patient will be left no longer indefinitely waiting for that other shoe to drop.

“An acquired nevus over the age of 50 does not necessarily have a higher rate of turning into melanoma,” says Dr. Jennifer Gordon, who is board certified by the American Board of Dermatology and practices at Westlake Dermatology located in Austin, Texas.

Dr. Gordon explains, “Malignant transformation is thought to happen in one in hundreds of atypical nevi and one in thousands of common nevi.

“There is a higher chance of a new pigmented lesion being melanoma with age, which is why annual skin exams are important and patients should routinely monitor their own skin.”

Why not routine prophylactic removal of new moles in older people?

Dr. Gordon says, “De-moling or preventative removal of nevi is not justified from an epidemiological standpoint. Nevi should only be removed if they are suspicious for atypia or cancer.”

A mole is not suspicious for melanoma simply because it’s new on an older person.

A new mole on, say, a 57-year-old, is not concerning if it looks normal, and this includes fitting into the collective appearance and shape of this person’s other moles (e.g., it’s medium to dark brown, rather than black or grey).

Older age, in and of itself, does not warrant a biopsy, let alone complete removal.

“If there is a nevus that is different than others, changing or worrisome to the patient, then we will sample it,” says Dr. Gordon.

The worrisome nature of the patient may be based solely on the fact that the mole is new and they’re over a certain age.

But the patient also might be noticing that the spot is changing color or has some other worrisome feature such as ragged edges, red or maroon parts or bumpy parts that weren’t there a few months ago.

“Often a new lesion in a patient over the age of 30 does get sampled if it is changing (i.e., new) if they are not routinely making new nevi. However, many people continue to make new and benign acquired nevi throughout their life.”

Are you aware whether or not you’re routinely making new moles?

You need to be very familiar with all the spots on your body, so that if a new one pops up, you’ll know it’s new: “This was never there before.”

And a spot that looks like a new mole isn’t necessarily a mole; it could be a harmless skin barnacle (seborrheic keratosis).

These usually start appearing after age 40. A new red spot may also be a harmless angioma (again, typical after age 40).

Always bring new spots to the attention of a dermatologist.

Conclusion
Dermatologists do not recommend that new moles be prophylactically removed for the sole reason that the patient is of older age. “There is no data supporting ‘preventative’ removal of nevi,” says Dr. Gordon.

A perfectly normal-looking mole, though new, should remain in place, but the mole must become part of the older patient’s monthly self-exams of their skin.