How Intense Must Exercise Be to Prevent Alzheimer’s?

When it comes to preventing dementia or Alzheimer’s, exercise isn’t all the same; it really does make a difference if it’s light or intense, and research shows this.

A study regarding dementia and exercise has a very interesting result. It’s no secret that regular exercise is great for brain health, as well as so many other things, no matter what the age of the person exercising.

The study looked at 1,238 people, none of whom ever had a stroke. Small brain lesions are known as silent strokes and are the first indication of cerebrovascular disease. 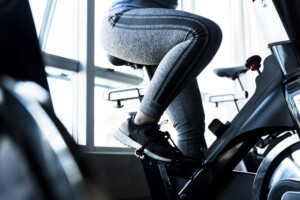 Says Dr. Willey in the paper: “Encouraging older people to take part in moderate to intense exercise may be an important strategy for keeping their brains healthy.”

The participants filled out a questionnaire at the beginning of the study, then had brain MRI scans after about six years; the average age at this point was 70.

Sixteen percent of the subjects, after six years, had small brain lesions. The 40 percent value was after other variables were adjusted for, such as smoking and high blood pressure, which can harm the brain’s vascularity.

A startling finding was that there was no difference in brain lesion likelihood between the non-exercisers, and those who did light exercise.

“Of course, light exercise has many other beneficial effects, and these results should not discourage people from doing light exercise,” says Dr. Willey.

What about older people with mobility problems?

If an older person has mobility problems due to, for instance, osteoarthritis in the hip or knee joints, he or she can still exercise at a moderate to intense level, doing sit-down upper-body routines with resistance.

Of if they can stand in one spot without knee or hip pain, they can do a standing strength training exercise.

Rather than just going through the motions on a weightlifting machine or with free-weights, the older adult should use a resistance that’s challenging and gets the heart rate elevated.

Seniors who are new to strength training should start out lightly and just get their joints used to the motions, and over time, they can increase the resistance and make workouts more challenging.

The full report is in the June 8, 2011 online issue of Neurology. But you don’t really need to read the full report in a neurology journal; even common sense dictates that harder, more passionate exercise has more of a beneficial effect on the brain than mere light exercise–helping to prevent dementia or Alzheimer’s disease.