How to Safely Descend Talus and Scree Slopes 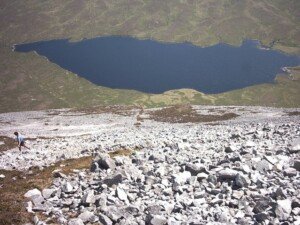 Descending talus and scree slopes with agility and grace can be achieved by the athlete in YOU!

If you plan on doing a lot of wilderness trekking, sooner or later you will encounter a talus slope. I have witnessed very hiking-fit men and women get stopped in their tracks when confronted with a talus slope.

Backcountry hiking may include treacherous surfaces such as talus and scree. Practice ambulating small, more local such slopes (if possible) before venturing into the wilderness.

Deep, lightweight squatting (bodyweight and holding dumbbells) will carry over to talus and scree ambulation. So will deep jump squats and deep squat-walking (forward and sideways).

The deep stationary and moving squat is actually how you should ambulate down talus (and scree) to prevent falling.

Talus is a slope composed of rock debris.

The rocks range in size from softballs to basketballs, to half a file cabinet to larger, and they’re piled densely, so it’s impossible to avoid stepping on them in a talus field.

Many are loose and will give way the moment you put your body weight on them—and down you’ll likely go if you’re erect.

The lower your center of gravity, the shorter the distance you can fall, and the less likely you’ll fall.

To safely ambulate down a talus slope, drop your center of gravity so that you’re in a wide-foot-placement squat.

Orient your body about 45 degrees from the base of the slope, and begin descending, arms out for balance.

When descending, you should periodically alternate between facing 45 degrees right and 45 degrees left of the slope’s base, so that one side of your body doesn’t over-fatigue.

This angled descent means that the foot that’s closer to the base will be the lead foot, reaching out to make contact with a rock to step on, maneuvering your body weight onto it and then moving the back leg accordingly.

The squat should be close to 90 degrees, but if it’s past 90 degrees, that’s even better—way better.

Try the deep squat walk (feet flat on floor; this is not a “duck walk”) indoors and see how difficult it is to fall. You just can’t. However, it will be very fatiguing for many trainees.

Descending a talus slope in this fashion will pretty much ensure against falling.

The second component to talus descents is to “feel out” rocks before placing your lead foot on them.

Before transferring your weight, use your foot to see if the rock moves. If it wobbles, avoid it and try another rock. If it’s stationary, then shift your weight onto it.

Though this may seem like a very slow way to descend, a trained individual can actually ambulate this way quite quickly.

Natural athletes will have an innate ability to do this, some more swiftly than others.

And the not so athletically-blessed individuals will struggle with the agility component.

However, practice makes for an efficient talus descent. It’s not a race. The goal is to just get to the base without falling or twisting an ankle.

Don’t think for a second that going down in an upright position while using “hiking poles” is safe.

The more erect you are, the more likely you’ll fall (even if you have poles), and the longer the falling distance will be. Plus, a pole can get stuck between rocks and make you slip.

If there are no local talus fields to practice on, the next best thing is to practice the downhill, 45 degree squat walk on a slope of grass or tundra. This will at least train the muscles for this motion.

Scree is a collection of broken rock fragments; these small fragments create a slippery surface that’s easy to fall on. 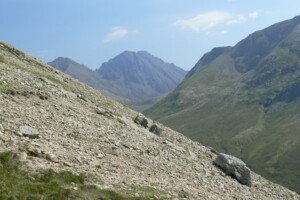 If you’re walking down a scree slope facing forward with an erect posture, you’ll be at a very high risk of falling flat on your back, or landing on your tailbone.

To safely descend, drop your center of gravity (at least a 90 degree squat), keep your feet widely spaced, and angle your body 45 degrees from the slope’s base.

In fact, angling it 90 degrees is even safer (literally a sideways descent).

Then use the lead foot and move.

It will be virtually impossible to fall with this body position.

You may slide, but the fall will be difficult to produce.

If it does occur, you’ll already be so close to the ground that you won’t be seriously injured.