Can Moles Grow from Scabs? 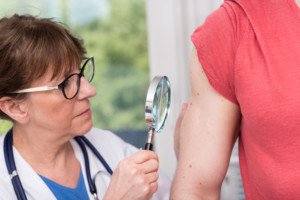 Whether or not moles can grow from a scab is a popular question.

And it has a definitive answer.

A scab is composed up of dried blood and a binding tissue called fibrin.

A mole is made up of cells that contain pigment. These cells are called melanocytes.

“There are some reports that injuries or chronic inflammation can trigger the growth of moles, so that might be one possibility of a mole arising after a scab was formed,” says Dr. Gordon.

But this does not mean that the mole outright grew directly from the scab.

Blood and fibrin cannot turn into a bunch of melanocytes, any more than a scab can morph into bone or muscle tissue.

“More likely are conditions called post-inflammatory hyperpigmentation or certain scars like dermatofibromas that can look pigmented and be easily mistaken for moles,” Dr. Gordon explains.

“The other thing that I often see as a dermatologist is that a patient was unaware of a mole and it became irritated or inflamed, and after the scab healed the mole was still present or looked larger or different.

Again, always a good idea to have any new moles [or what seem like new] or previously scabbed moles checked by your dermatologist.”