Can You Get Melanoma from Scratching a Mole? 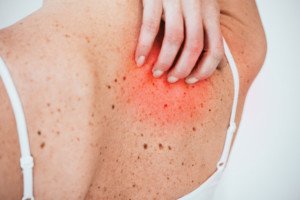 Whether you deliberately scratch an itchy mole or just happen to scratch it because it’s in an itchy area, you may wonder if melanoma can be caused by this.

Melanoma from scratching a mole is “unlikely” but not a “say never” situation, says Dr. Jennifer Gordon, a dermatologist who is board certified by the American Board of Dermatology and practices at Westlake Dermatology located in Austin, Texas.

Cancer like melanoma occurs because of a mutation in DNA, which can happen from repeated sun exposure.

So on one hand, it does not make sense that a cancer like melanoma can be caused from scratching a mole; after all, how can this cause a derangement to its DNA?

Dr. Gordon explains, “You can never say never, but typically irritating a mole, such as scratching it, catching it on clothing or jewelry or having your young child ‘pull it off’ will not cause it to turn into a skin cancer.”

You can imagine the millions of women every year who get moles pulled at by the baby or toddler they’re carrying—without even realizing it.

And what about all the moles that get inadvertently scratched by clothing?

If scratching a mole can turn it into cancer, in the true sense of the word, then melanoma would be very common. It’s actually an uncommon cancer, though highly publicized.

Dr. Gordon adds that scratching “can often cause the mole to change shape or actually grow in size slightly, but unless the mole has changed with regards to the ABCDEs of melanoma, then it has not likely caused any damage.

“We don’t recommend trying to remove your moles because often the resulting mole (or recurrent mole) can look funny and warrant a biopsy despite it originally being okay.”

Why Melanoma from Scratching a Mole is “Unlikely” Rather than Impossible

Dr. Gordon says, “Chronic irritation and prolonged wound healing can cause a change in growth factors in the skin, and certain types of skin cancers can form because of this stimulation, so although unlikely, have your mole checked by your dermatologist but don’t lose too much sleep over it.”