Left Side Neglect Caused by Brain Bleed from Hit in Head 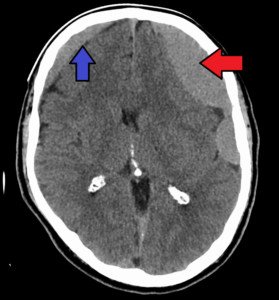 Left side neglect can be caused by a chronic subdural hematoma (a type of brain bleed) that’s on the right side of the brain.

My mother had a chronic subdural hematoma on the right side: twice.

There were no signs of left side neglect with the first chronic subdural hematoma.

It was drained, but about 10 days later she began dropping things with her left hand.

Over several days her gripping ability in the left hand deteriorated, along with fine motor control.

When my mother was recovering in the hospital following the second draining procedure, the physical therapist said she had left side neglect of the hand and leg.

In hindsight, it’s now clear that the motor control of her left hand, pre-surgery, was at least partially a left side neglect process, since she would try to pick things up and miss, yet think she had the item in her fingers, such as a hair clip.

She’d also try to pull up her panties or pants, and instead be pulling up air, believing she had the pants between her fingers, while the pants remained low on her body.

She’d then walk away, not aware that the left side of her pants/panties were not pulled up.

Pre-surgically my mother had wanted to go into the dining room from the kitchen, which requires a left turn.

But once through the doorway she veered rightward towards the living room.

At the time I thought this was some altered mental status, but in hindsight, I realize it was left side neglect, caused by a recurrence of the chronic subdural hematoma or brain bleed.

Post-surgically, she showed signs of left side neglect while working with her physical therapist.

The seating in her hospital room was to her left. If I started talking to her, while in the seat, while she was watching TV, she’d continue watching the TV, as though I weren’t there.

I’d then have to raise my voice to get my mother’s attention, or stand and move closer to her, more into her straight-ahead field of view, to get noticed.

This was left side neglect at work, even though the brain bleed had mostly been drained.

But residual fluid remained on my mother’s brain, and this remaining fluid caused more pronounced symptoms post-operatively while her body was working on resorbing it.

One she was transferred to a skilled nursing facility, the neurological phenomenon was more obvious.

She’d exit the bathroom (located at the beginning of her room) with her walker, and instead of making a 90-degree right turn towards the main room, she didn’t clear the turn and ended up hitting the wall (across from bathroom) with the left bottom of the walker.

In other words, when my mother was turning rightward, she wasn’t accounting for the left side of her surroundings.

When walking through the corridors, she kept getting sidetracked by rooms, doors and even wall pictures on the right. This was not normal behavior for her.

When a therapist had my mother fill in dates of a blank calendar, she started in the middle of the first row, which the therapist said someone with left side neglect would do.

Every time my mother exited the room, she’d make a right turn (which led to nowhere that would interest her: other patients’ rooms), even though we kept instructing “Go left” whenever she made this error (the dining hall was left, along with other main services).

As is typical with left side neglect, my mother was never aware  there was something going on.

To someone with this intriguing condition, a therapist told me that it all seems normal to them, and that what they perceive as their “midline” is actually a rightward orientation.

The right side of my mother’s world was getting processed by her brain, yet the processing of the opposite side was compromised.

Chronic subdural hematoma on the right side of the brain can definitely result in neglect on the opposite side of the body.

As the brain bleed resolved, so did my mother’s left side neglect.