How to Be Confident if You’re the Youngest Kid in Your Class! 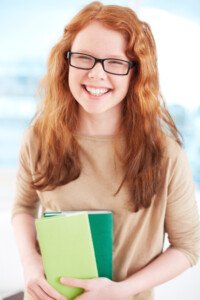 There’s no shame in being the youngest kid in your class or entire grade!

I was once that kid, and I will tell you how to deal with it.

I skipped kindergarten, was 13 in the ninth grade, and 17 when I went to an out-of-state college.

Common complaints from kids who are the youngest in their class:

#1     Being made fun of for being the youngest in your grade.

Hearing from your parents, “Oh, just ignore them because they’re jealous,” doesn’t help much. Ignoring ridicule won’t make it disappear.

However, in all seriousness, ask yourself: What’s wrong with being made fun of because you’re younger than the other kids in your class?

Is there something inherently wrong with being 13, or whatever age you are?

Okay, if you’re 13 and in the sixth grade…I can understand that being made fun of for this will hurt.

Next time kids poke fun at you just because you’re younger than the rest of the class, say this:

Now be a good sport when you say these words; don’t speak in a hostile tone.

#2     It hurts to see classmates doing things that your parents don’t think you’re old enough to do.

Remind yourself that if your parents won’t let you start dating till you’re 15, it will take just as long to turn 15 — whether your classmates are 15, 14 or 13!

Most parents won’t let their kids date until they reach a certain age. It’s a parent’s rule that was probably decided upon before you were born.

The age of permission, whether it’s dating, going alone to the mall, babysitting or whatever, is determined by your parents’ approach to raising kids — NOT how old your classmates are!

Ask yourself on what grounds do you make this conclusion? You could be dead wrong.

Often, the immature kids are either the same age as most everyone else in their class, or even a bit older.

I spent grades 9 and 10 in a school with almost 1,000 students, and this is so true: The younger kids for their grade were actually the better behaved students.

The older kids in the class thought they were the class leaders and were sometimes on an ego trip, which isn’t a mature way to think.

Being around older kids (who are mature) will accelerate your own maturity.

This is the same concept with sports. If your tennis partners are always a little better than you, you will get better faster than if your partners always play worse.

So if you’re around older kids all day long…the general rule is that you’ll be inclined to act a little older rather than a little younger.

Write down the names of kids in your grade you think are childish and immature. Write their ages next to their names. How many are older than you?

Other Points to Consider

Don’t bother trying to look older. Just be yourself. If classmates know your age, this won’t change if you start wearing makeup or doing something stupid to look older like smoking!

In fact, you may not even look younger than your peers anyways.

And if you do appear a lot younger, realize there’s nothing inherently bad about a 13-year-old looking like a 13-year-old, or whatever age you are and looking your actual age!

Do classmates even know your age?

It’s possible that nobody knows you’re the youngest in the class. But maybe you’re worried about the word eventually getting out.

Remind yourself that there are kids, who are younger, who actually embrace this because — as mentioned — it’s a sign of achievement, not failure.

If you’re the youngest in your grade, stand proud and know that you’re ahead of everyone else. Focus on more meaningful things in life, such as:

Do you brush your teeth every night before bed? Do you exercise and try to eat healthy foods? And no matter what, DO NOT SMOKE. It stunts growth and does NOT make you appear older.