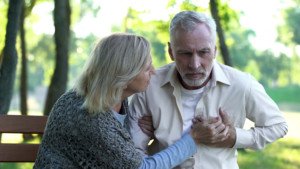 If your elderly loved-one’s D-dimer result came back positive — don’t yet panic that it’s probably a pulmonary embolism.

The older a person gets, the less meaningful is a positive D-dimer result when a pulmonary embolism is suspected.

If you present to the ER with symptoms that can be caused by a pulmonary embolism, you’ll get blood drawn for a D-dimer value.

“The body has a system that regulates our blood’s ability to clot,” says Christopher J. Hanifin, PA-C, who was previously a physician assistant in open heart surgery with Cardiothoracic Surgery of South Bend in South Bend, IN.

“Clots are always forming in our bodies in response to injury and inflammation, and the body needs a mechanism for breaking these clots down.

“As these clots dissolve, products of their breakdown can be detected in the blood.

“One of these products is called D-dimer, and an elevated D-dimer level may signal the present of a large clot somewhere in the body.”

Hanifin explains, “In young patients, a D-dimer level is fairly sensitive for a large clot.

“It’s important to recognize that lab values do not remain fixed over the course of a lifetime.

“‘Normal’ values may change as part of the normal aging process. This is the case with D-dimer levels, which rise as people age.

“A naturally higher D-dimer level in patients can make interpretation of the test challenging.

“Fortunately, there are imaging studies that can assist in the diagnosis of pulmonary embolism.

“With older patients, a clinician will usually have a lower threshold for checking imaging studies.”

When the D-dimer is positive, the imaging tool of choice is the CT scan — to capture an image of the chest, which would reveal a pulmonary embolism if one (or more) were present. 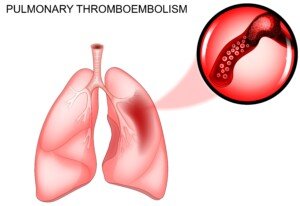 However, the older a person is, over age 50, the less likely a positive D-dimer result will mean a pulmonary embolism.

A 2014 issue of CHEST published study results regarding the D-dimer.

The typical scenario is that the patient presents in the emergency room with symptoms suspicious for a blood clot in the lung (PE).

Blood is drawn for the D-dimer. If it’s positive, that means a trip to the CAT scan wing or some other imaging modality.

This happened at least four times to my mother (senior aged). All the results were positive, yet a blood clot was never found.

In elderly patients, the result is often a false positive.

The study involved over 900 patients. Scott Woller, MD, adjusted the threshold for D-dimer levels to correlate to the patient’s age, with the idea of excluding a PE without having to rely upon the CT scan.

What’s the issue with the CT scan?

What’s the standard cutoff for a D-dimer result to identify a blood clot?

It’s 500. Dr. Woller’s research recommends that this threshold should be bumped up for people over age 50:

Multiply the patient’s age by 10 for the cutoff value.