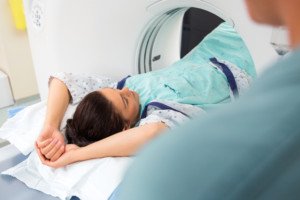 In the ER a doctor should order a D-dimer test if there’s suspiction of a pulmonary embolism based on symptoms.

It’s alarming, however, that in some cases this procedure is not followed.

A study shows this. And another finding of the study was that some ER doctors were ordering CT scans for pulmonary embolus even though the D-dimer test was negative.

The study was carried out at the Warren Alpert Medical School of Brown University and Rhode Island Hospital, Providence, RI.

You’re in the ER with Concerning Symptoms

Symptoms that are suspicious for a pulmonary embolism — which is a blood clot from the lower extremity that travels to the lungs — include chest pain, difficulty breathing and one leg that is swollen, painful and red.

The physician should order the D-dimer.

But if this test comes back positive, is a CT scan (which emits radiation) always necessary?

“It is helpful to rule out PE if it is low/normal. If suspicion is high for pulmonary emboli, and the D-dimer is elevated, a chest scan or V/Q scan should be ordered to look for a potential clot.

“Generally, the lower extremities will also get an ultrasound looking for a DVT.

“If the D-dimer is low and you have a lower suspicion of PE, then a chest scan is not always imperative.

“This is when scoring criteria and looking at the patient as a whole come into play.

“Specifically for PE I can use Wells’ criteria, PERC or PESI scores.

“This can give me a good idea of what percentage risk a patient has for the emboli.

“If a patient had a low score, potentially unclear or low risk history and associated low D-dimer result, I would not always need to add on chest imaging.

“It is also important to recognize what else aside from a PE/DVT may cause an elevated D-dimer.

“This can happen with DIC [blood clotting disorder], malignancy, pregnancy, renal disease and even surgery, to name just a few.”

Positive D-Dimer on Three Separate Occasions but No Pulmonary Embolism

My mother’s D-dimer test came back positive on three separate ER visits over time. We were told that this could mean that there was a blood clot somewhere in her body.

We were also told that simply being elderly could cause a positive D-dimer result.

My mother then underwent a CT scan of her chest, which did not reveal a pulmonary embolism. 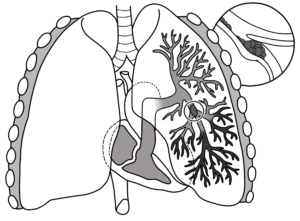 An elderly person with heart disease would certainly not be low risk for a PE. But heart disease can also yield a positive D-dimer.

For the Warren Alpert study, 5,344 patients were involved, and of the ones who had a positive D-dimer, 42 percent did not get the CT scan.

These patients should have had the CT scan, says lead study author Michael T. Corwin, MD, in the report.

The CT scan was performed, however, in 7 percent of the people who had a negative D-dimer.

Dr. Corwin says that these patients should not have had the CT scan. This is unnecessary exposure to radiation.

The paper points out that a lot of CT scans are being ordered despite a negative D-dimer, and a lot of those CT results are negative for a pulmonary embolism.

D-dimer testing does not rule out PE completely, but in people with a chance of having this — based upon their presenting clinical picture — a negative D-dimer can spare these patients the radiation dose from a chest CT scan.

In addition to treating many chronic conditions, Dr. Patel treats urgent conditions that affect every part of the body. Instagram: That_dr_next_door