What Should I Do If My Child is Afraid of Santa Claus? 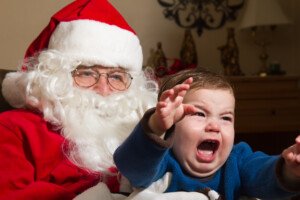 Some parents cringe when their preschooler or toddler shows fear of sitting in Santa Claus’s lap.

Instead, parents should feel joy.

If a toddler or preschooler has no qualms about Santa Claus’s lap, parents should wonder just how easy it would be for a predator to lure this child into a car or woods when he or she is older.

A child with a built-in radar that warns him to stay away from strangers, is far less likely to be lured by a pedophile than is a preschool child who happily jumps into Santa Claus’s lap.

A smart child hesitates before climbing into the lap of Santa Claus, who means nothing more to that child (until he’s old enough to grasp the concept) than a big stranger with a white beard.

I’m not suggesting that kids who jump eagerly into Santa Claus’s lap will never learn to recognize “stranger danger,” but parents should feel a sense of relief, not embarrassment, if their child is afraid of Santa Claus. Parents have been known to get very dramatic over this.

Parents have even spanked kids because the kids refused to sit in Santa Claus’s lap.

Kids have been called cruel names by parents because they were scared to sit in Santa Claus’s lap.

Children have been yanked away like stray dogs by disgusted parents and told they’d be getting no presents, all because the child had a well-tuned “stranger danger” radar. This radar may one day save your child’s life!

Pedophiles rely on a child’s WILLINGNESS, not reluctance, to be lured away!

Santa Claus’s lap should be a happy experience for the preschooler or toddler, not a terrifying one.

So if your child has “embarrassed” you before by showing fear of Santa Claus, realize that the fear is instinct kicking in.

Humans are hardwired by nature to be afraid of that which looks very different and unfamiliar. It’s not smart for parents to diffuse this innate guard in a child.

It’s what will help keep a child from wandering off with that “nice” man at the park (who’s already molested 28 kids) who’s offering your child candy or asking your child to help look for his lost puppy.

Often, pedophiles lure kids because they don’t want to create a scene. How else can they get kids to go off with them? They entice kids. But not all kids fall for this.

Parents can bet that the kids who kick and scream upon being placed into Santa Claus’s lap, are more likely to refuse to help that “nice” man at the park search for his lost puppy — they will sense that something isn’t right about the man — but this wonderful radar can be destroyed by parents who make these panic-stricken kids remain in Santa Claus’s lap for a photo.

That “nice” man who can’t find his puppy is looking for a more social, “obedient” child!

Don’t you yourself have a natural instinct to stay away from creepy looking people?

If you’re a woman, would you go near a weird-looking man in the parking garage who’s calling you over to his car to help him lift something out of the backseat? Many men wouldn’t even take this chance.

But this is the same warning light that goes on in young kids who battle against sitting in Santa Claus’s lap.

Even though the parents approve of the idea, these kids still won’t buy into it, any more than you yourself would approach that creepy-looking man in the parking garage if your own parents urged you to help him out.

Parents expect young kids to be fearless towards strange-looking men in red suits with funny white beards, yet these parents exhibit fear of other people in many circumstances.

If you’ve ever scolded your child for being afraid to sit in Santa Claus’s lap, ask yourself:

Ever been afraid to speak up to your boss at work?

Ever been too fearful to report sexual harassment (or just deck the guy in the chops) at work?

Ever been scared to have an MRI, despite the doctor reassuring you?

Ever been too frightened to walk on the same side of the street as the bearded man in rags walking towards you?

Afraid of the dentist by any chance?

Why is fear in kids so often dismissed, yet their parents expect their OWN fears to be taken seriously — so seriously, in fact, that they’ll even sue over the fear?

Next time you feel like making your crying child sit in Santa Claus’s lap, imagine how you yourself would feel upon noticing that a strange-looking, bearded man is following you on his bike as you jog in the park.

Would you want to sit in his lap?

Even if your parents insisted ??

Would you want to sit in ANY stranger’s lap? Sitting in anyone’s lap is a very intimate-type thing.

Imagine your discomfort level upon being forced to sit in a complete stranger’s lap, especially a stranger who’s much bigger and looks really strange.

Well, this is how a frightened child feels about Santa Claus’s lap, but magnified.

Though all of this Santa-Claus-Fear info seems like plain ‘ol common sense,

Here is what Robin Altman, MD, child psychiatrist, mother of two and author of “Shrink Rap – An Irreverent Take on Child Psychiatry,” says about forcing kids to sit in Santa Claus’s lap:

“It is important not to chastise children for being fearful about sitting in Santa’s lap.

“It is a natural reaction, and can help them stay away from adults who mean them harm.

“Parents do not want to have a child who has no fear of strangers and can be coerced into dangerous situations.

“Yelling at kids about this, can override a very helpful innate response, and put kids at risk in the future.”

In practice for 20+ years, Dr. Altman specializes in expert witness evaluations and testimony in child, adolescent and adult psychiatry. robinaltmanmd.com