How to Deal with a Child Afraid of Santa Claus 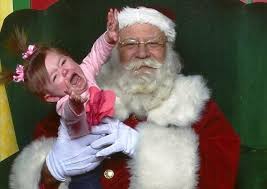 If your child is afraid of Santa Claus, there is one very simple technique to correct this problem. Plus additional tips for frustrated parents.

Something about the commercialism of Christmas makes many parents lose their senses.

Sitting in Santa’s lap is truly a big deal for many parents, far more so to parents than to the child.

The issue shouldn’t be what can parents do to get frightened kids to sit prim and proper in Santa Claus’s lap.

The issue should be HOW should parents deal with a child who’s afraid to go near Santa Claus or, even just plop down in his lap.

What should parents do?

“Okay, you don’t want to sit in Santa Claus’s lap. That’s perfectly fine. Your feelings are important, and this is a choice that YOU should make.

“Nobody has a right to touch your body if you don’t want them to. Let’s leave.”

Take your child’s hand and casually leave Santa Claus’s palace. No preschooler or toddler is too young to hear these encouraging words.

The sooner that parents put it in a kid’s head that NOBODY HAS THE RIGHT TO TOUCH A CHILD AGAINST HIS WILL, then the less likely this child will ever be a victim of sexual abuse, especially repeated sexual abuse in which the victim keeps silent about it for many nightmarish years.

Give or take on the verbiage example; you get the main idea: Simply remove your son or daughter from the line of kids, and move on to your next project at the mall.

This solution is excellent because:

It does not attract attention.

It prevents tantrums, crying and yelling.

It prevents parents from becoming stressed and embarrassed.

It preserves the child’s feeling that he (or she) has dominion over his body.

It preserves the trust a kid has in the parents.

It teaches the child that he is the absolute decision maker in who touches his body — a proven precursor to minimizing risk of future sexual abuse by a priest, cousin, teacher, etc.

It teaches kids to look up to and admire parents and seek life advice from parents.

Fighting with a scared child to get her on Santa Claus’s lap is certainly not the easy way out for parents faced with this challenge.

And it shouldn’t even be a challenge.

If your son or daughter is afraid of Santa Claus, take a “so what” attitude and simply move on with your shopping.

Parents will have plenty of opportunities down the road to wage battles with their kids.

Something that’s steeped in make-believe should not be one of them.

Nothing good will come out of forcing a child to sit in Santa Claus’s lap.

It’s nothing more than a power struggle for parents, fueled by a variety of factors. 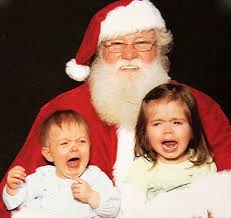 Parents need to search within themselves why it is so earth-shakingly important to see their child sitting in Santa Claus’s lap — especially when the parents don’t even know the first name of the store employee playing St. Nick!

Parents need to relax and have fun with their child. That’s what make-believe is all about.

If your child is afraid of Santa Claus, then view the store’s giant Christmas tree, or visit the candy store.

If you’re convinced, however, that once your fearful child sits in St. Nick’s lap, she’ll be overjoyed, try these tactics recommended by Robin Altman, MD, child psychiatrist, mother of two, and author of “Shrink Rap – An Irreverent Take on Child Psychiatry.”

“If the child looks fearful they should verbally reassure them with things like, ‘Honey, Santa is a nice man! You’re going to be able to tell him what you want for Christmas! Isn’t that cool?’

“If they’re (parents) enthusiastic and look happy about the whole experience, they might be able to transfer that enthusiasm to the child.

“If the child still looks nervous, parents can spill the beans. ‘Look, it’s actually a man dressed up as Santa, but he’s really nice, and if you tell him what you want for Christmas, we’ll let Santa know.’

“If the child still looks nervous, take them out of line. Who cares what people think? There’s always next year!”

Kids will never be enthused about sitting in a stranger’s lap as long as parents are angry, agitated, stressed out and acting embarrassed over their child’s feelings.

In practice for 20+ years, Dr. Altman specializes in expert witness evaluations and testimony in child, adolescent and adult psychiatry.  robinaltmanmd.com