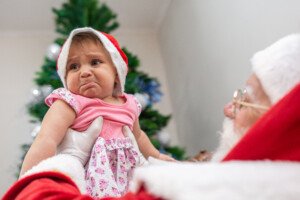 Have you ever forced your crying child to sit in Santa Claus’s lap because your child was embarrassing you in front of other parents?

Or maybe you were hell-bent on getting that perfect Christmas photo of your child in Santa Claus’s lap to send out with the Christmas newsletter?

What is it about Santa Claus and Christmas that makes so many parents lose their senses?

Let me first say that I myself never had a problem sitting in Santa’s lap. I’d list all the presents I wanted for Christmas, but subconsciously knew that this was not where the presents came from.

My mother would have never made me sit in Santa’s lap. A few times she asked if I wanted to see him.

If I said no, then no big deal, we moved on to the shoe store or whatever. If I said yes, then she took me to see him.

No big deal either way. It was my decision to sit in a stranger’s lap.

I also remember asking to see Santa Claus one Christmas. My mother had more important things to worry about during the holiday season than whether or not her kids wanted to sit in a stranger’s lap.

My parents also weren’t the type to get that Christmas photo at all costs and then show it off to relatives.

So when I say I have only sensible memories of Santa Claus and his lap, you can believe me.

However, I have seen, in newspapers during the holiday season, more than enough disturbing photos of terrified, crying kids writhing in Santa Claus’s lap. Editors think these photos are cute Christmas lore. 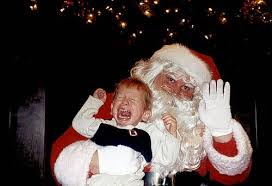 So do parents, giving the newspaper permission to print the screaming child’s full name. Well, this is insane.

You need not have a PhD  in child psychology to figure out what’s really going on here.

Now, before I go on, I DO realize that a small percentage of parents will force a crying child into Santa’s lap, believing this will “bring out” their shy child, or encourage more social interaction in general.

And of course, where in Heaven’s name do these parents get such a ridiculous idea?

The rest of the parents, however, make their scared, flailing child sit in an odd-looking stranger’s lap for the very same reason — ready for this? — that teenagers take up smoking.

You read that right. It’s called PEER PRESSURE. Some parents just can’t stand looking like the oddball in the group.

The group is their peers: other parents, whose kids eagerly stand in the Santa Claus line.

But little Emily (or Michael) starts acting up and says she doesn’t want to sit in the scary-looking man’s lap.

Oh, the sensible parent would say, “You don’t? Well, okay then. Let’s get one of those big hot pretzels. But if you change your mind, let me know.”

But there’s something about the commercialism of Christmas that makes sensible thinking obsolete.

No parent in her (or his) right mind will have a weird child — one who’s afraid of Santa Claus!

And what parents wish to be seen with a crying child afraid to sit in St. Nick’s lap?

And for all the other parents to witness this? How humiliating! So this parent, then, becomes consumed with forcing her child to be “normal” like all the other kids waiting in line.

Being different from the crowd is unthinkable! Even though you don’t know any of their first names !

This is the exact kind of thinking that often makes a teenager start smoking: because everyone else is doing it and he or she doesn’t want to be viewed as the chicken or oddball.

And so it is with parents who make terrified kids sit in Santa Claus’s lap.

They cannot bear the idea of having a child who acts different from other kids, who “embarrasses” them, and makes them look like incompetent parents.

Of course, incompetency shines brightly when parents get flustered, berate their crying preschool kids and force them into a stranger’s lap, and then wonder why, five years later, their child was lured by a pedophile into the woods after instructing their child never to talk to strangers…

Based on pure, sheer common sense, anyone has to clearly see that peer pressure is the overwhelming reason parents force even screaming kids to sit — sometimes after wrestling with them — in Santa Claus’s lap.

The drive to fit into the crowd and be like everyone else is just too overpowering.

Then again, maybe the lust for that Christmas photo is the insatiable drive.

If ever someone showed me a photo of their shrieking child sitting in Santa’s lap — look out; they will be in for a real dandy lecture.