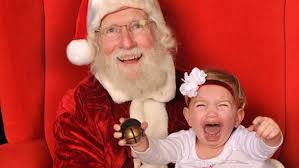 Making crying or screaming children sit in Santa Claus’s lap is an act of selfishness.

These parents have no clue how detrimental it is to force frightened, crying kids into the lap of Santa Claus … or, to put it another way, the lap of a huge stranger.

Some parents will actually get a kick or thrill out of watching their toddlers writhe and cry while sitting — against their will — in a stranger’s lap during the Christmas season.

It’s sickening how some parents will even take photos of their screaming, bawling child in Santa’s lap.

Obviously, these parents are thinking only of themselves.

They think it’s cute or charming to get a snapshot of their screaming child in Santa Claus’s lap.

Other parents who pull this cruel stunt do so because they feel embarrassed that their child dares to resist sitting in Santa Claus’s lap, especially when throngs of children are eagerly waiting in line to do this.

The parent thinks her child (or his child), is some kind of oddball, going against the grain. Little kids, after all, are supposed to love sitting in Santa Claus’s lap.

Nobody wants a kid who’s not normal, right? So never mind the kid’s fear, just shove him/her into the big guy’s lap. Brilliant! What a way to go!

Before you think my rant reflects any fears I had of Santa Claus when I was a young child, you’re mistaken, because my mother never got caught up in such commercialism; she was very practical, impatient and had no interest standing in long lines to see her daughter sit in a stranger’s lap.

She did not like this idea at all and thus, took me to see Santa Claus only if I insisted–which was maybe only a few times.

As a result, I didn’t know what I was missing as far as the Santa Claus lore, but before you feel sorry for me, realize that children miss only what they’ve been taught exists.

My Christian parents put the emphasis on Christ’s birthday, not St. Nick.

(I didn’t believe in the Tooth Fairy, either, but heck, candy and money under my pillow was just as valuable coming from my parents!)

My concept of Santa Claus was seeing a pile of presents under the Christmas tree every year, rather than a fat man in a red suit sitting on a huge chair at the mall.

I’m not even sure I ever really believed in Santa Claus  —  maybe when I was 2 and 3, but quite frankly, it didn’t matter where all my presents came from – as long as I got a lot of them!

The more “normal” children who scramble eagerly into Santa Claus’s lap are more likely to be lured by a pedophile, than are the shy kids who kick and scream in an attempt to avoid the lap.

The “I don’t feel right about this situation” instinct, in these kids is on very strong. And parents must realize this is a GOOD thing, nothing to be ashamed about.

This instinct can one day come in handy when some sex offender eyes your kid for his next fix.

By forcing your child into Santa’s lap, two things happen:

One: You teach your kid he does NOT have dominion over his body, that any adult can touch and handle him/her, whether he likes it or not. 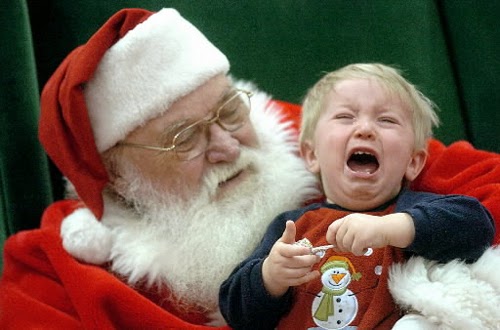 So a few years later, when the neighbor, priest or school janitor fondles him, he’ll freeze into submission.

And he’ll let this go on for years and years before finally telling someone.

Two: You teach your kid that you don’t give a damn about his feelings. So when he/she is older, you will be the last person she will go to when the going gets rough.

Instead, she will confide in peers at school for advice and direction. And you’ll wonder why your kid won’t open up to you.

So if you plan on forcing your kid to sit in Santa Claus’s lap, shame on you for being thoughtless and selfish. Your kid has a natural, built-in “be weary of strangers” tool, and the last thing you should want to do is dull its edges.