Mole with New Black Specks May Not Be Melanoma 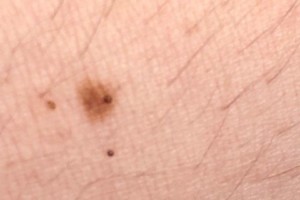 Here’s a benign explanation for why you see new black spots in your mole that weren’t there before.

Before I give this explanation, you should know that the new appearance of black in a pre-existing mole can mean melanoma.

However, don’t panic yet if you’ve discovered a new black spot or speck or two in a pre-existing mole.

This is what happened to me. I have a prominent mole on my shin—prominent in that it’s obvious, a medium dark brown and extremely easy to closely inspect, due to its location.

One day I looked at it and saw three tiny specks of black that were not always there.

I lightly rubbed my finger on it to see if the spots might come off, since I supposed that it was some kind of dirt.

But they remained in place. This was pretty scary. Everything else, however, about the mole, appeared unchanged.

I then shaved my legs. I lightly grazed the razor up my entire shin, over the mole just once (very lightly at this point), in the manner that I’ve always done.

Then I rinsed the cream off and let my leg dry. I then inspected the mole: The black spots were completely GONE.

Does this mean I shaved off the part that was melanoma?

Or could it have been very tiny fibers from the black sweat pants that I had slept in overnight, that I had taken off before inspecting my legs?

I had a visit already scheduled later that day with a dermatologist, for my third serial digital dermoscopy appointment.

This is a teaching hospital, so the first person to examine me was a dermatology resident.

I told him about the mole.

He examined it with a dermatoscope and said it looked benign, that the “reticular pattern” was normal. Then, the actual dermatologist said it looked normal.

I already had nine moles in the hospital’s digital dermoscopy database, but they decided to include this mole as well.

The computer analysis showed that it was normal. In fact, the doctor told me I could wait two years before coming in again because everything was “so stable.”

How would minute fibers from my black sweat pants or any black micro-debris just happen to find their way into a single mole?

“If a mole has black specks on the surface that easily wash off, this should not be of concern for melanoma,” says Emily de Golian, MD, a board certified dermatologist with Dermatology Consultants, P.C., in Atlanta, GA.

“Just like any other location on the skin, dirt may adhere to a mole and is easily removed with soap and water.

“If, however, dried blood [which can appear as black specks] is present on the surface of a mole, the mole should be evaluated by a board certified dermatologist.

“Moles may bleed due to trauma, which is not inherently bad, but if a mole has developed spontaneous bleeding, this could be a sign that the mole cells are atypical and need to be removed.

“Dried blood will often appear red or dark red when moistened and removed with a white towel or tissue, so this may help distinguish what type of substance is being removed from the mole surface.”

I had not checked the skin elsewhere on my legs for any fibers, so for all I know, they were elsewhere, and would have been difficult to spot without getting close up, and impossible to spot on the back of my legs. But fibers can get anywhere.

The image at the very top of this article shows a mole that rapidly developed a dark spot in it.

The cause was aggressive rubbing with a finger to see if a slightly darker area on the left was dirt (which it turned out wasn’t).

These tiny scabs persisted for a few weeks. Below is the same mole, but the dark speck that had been in it had become dislodged and ended up loosely sitting on the skin next to it. The two other specks eventually fell off as well. 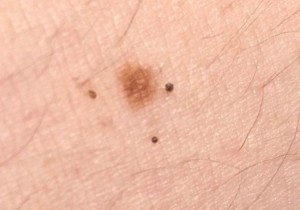 If you notice new black specks or spots in a mole, don’t try to pick them off. And don’t panic.

Take a normal shower and see if the water rinses them away. If not, wait several more days to even a few weeks to see if they just naturally fall out. If they don’t, see a dermatologist.