Half of Mole Suddenly Falls Off, Bleeds 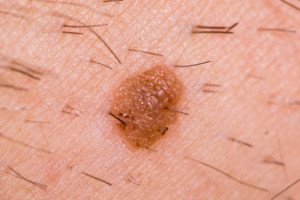 Has half or part of one of your moles suddenly fallen off and has bled?

Are you afraid this is melanoma?

“When half of a ‘mole’ suddenly falls off and bleeds, it usually is not a mole but a benign seborrheic keratosis that has caught on some undergarments,” says Dr. Janet Prystowsky, board certified dermatologist in New York, NY, with 30+ years’ experience.

A seborrheic keratosis is a skin barnacle and it’s benign. These skin growths typically begin appearing after age 40 and will NOT turn into melanoma.

However, keep in mind that these harmless barnacles may look very much like a mole — especially if it’s in a difficult-to-inspect location such as your butt or back, not enabling you to get a close view. 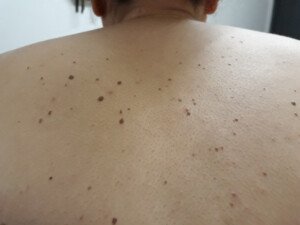 They may even resemble melanoma and can suddenly change appearance.

However, if you notice that a diagnosed seborrheic keratosis is changing in appearance or even bleeding, have it checked by a dermatologist because, by sheer coincidence, it’s possible for a melanoma to start up on the same skin surface area as the barnacle.

The seborrheic keratosis does NOT cause or trigger the melanoma. But the presence of these skin barnacles does not prevent melanoma from taking over the space, either.

Another situation that may appear as part or half of a mole tearing off and then some bleeding, is that of the skin tag.

“Sometimes a benign skin tag will twist on its stalk and may completely or partially fall off,” says Dr. Prystowsky.

“However, if a true mole (nevus) begins bleeding (whether or not part of it falls off), it could represent a melanoma and a quite serious one.

“Other forms of skin cancer, such as a pigmented basal cell carcinoma, may bleed and resemble the appearance of melanoma.

“A professional opinion from a dermatologist should be sought for any growth that starts bleeding, especially if you have no recollection of it being traumatized.”

In combination with her focus on early skin cancer detection and removal, Dr. Prystowsky provides a wide range of revitalizing and rejuvenating treatments.