Why Old Men Have Skinny Arms & Legs but Big Bellies 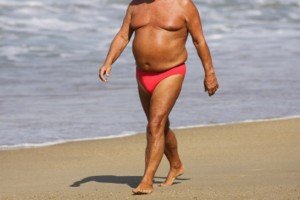 Ever notice how many old men have skinny legs and arms, but plenty of fat in their bellies?

In fact, as they age, men typically lose mass in their legs and arms — they get thinner, while their belly just gets fatter and fatter.

There is a perfectly logical, and quite simple, explanation for why, as men get older, their bellies get bigger while their legs and arms get thinner or scrawnier. It has to do with the metabolic furnace.

This phenomenon happens to men who don’t perform weight-bearing workouts on a consistent basis.

To put it another way, the increasing stomach size and decreasing leg and arm size will happen to nearly every man who doesn’t exercise, as he gets older.

The only exceptions are very underweight men, and it’s rare to see an old man with scrawny arms and legs and a flat firm tummy.

The metabolic furnace is the body’s muscle.

For inactive men (and women), beginning at about age 30, the body begins losing muscle mass. As muscle mass decreases, metabolism slows down.

A slower metabolism means that the rate at which you burn calories from food slows down.

A man, who was never into working out, as he approaches middle age, continues to lose muscle, about five pounds’ worth per decade.

By age 50, this sedentary individual has lost around 10 pounds of muscle. 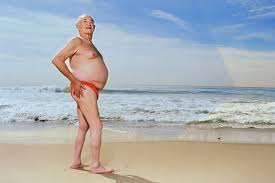 So why does the belly in these men get fat?

Muscle burns more calories than any other body tissue; muscle is the body’s metabolic furnace.

The less muscle you have, the slower your metabolism (even though it may still be on the fast side, but relative to what you had when you had more muscle, it is slower nevertheless).

So food that used to get used by the muscle that was once in the legs and arms, is now getting stored as fat, and the first place men store fat is in the belly.

This phenomenon doesn’t just happen to skinny men as they get older.

A medium or even portly man will notice that as years go by, their belly just keeps getting bigger and bigger, while strangely, once thick legs are now smaller.

These men no longer have the muscle mass in their arms and legs to support their daily food intake, and thus, the non-used calories get stored in their belly as fat.

I might also mention that the muscle loss also occurs in their chest, back and shoulders.

However, loss of muscle is most evident in the legs and buttocks.

The fat belly in an otherwise “healthy” (free of disease) aging man is entirely preventable through strength training workouts. 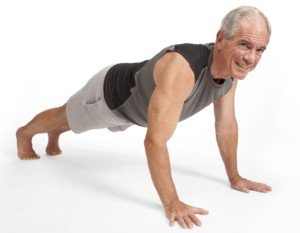 I see this all the time at the gym: old-timers with washboard abs, strong sturdy shoulders and backs, muscular arms and strong, toned legs.

Men over 30 who have noticed an ever-growing belly of fat can reverse this situation 100 percent in many cases (depending on variables including age).

The best way for men to lose the paunch is to hit the weights for their legs, back, chest and shoulders, and not camp out – yes, I said “not” – at the crunch machines.

Strip off Fat with HIIT Workouts

Which Muscles Burn the Most Calories During Exercise?