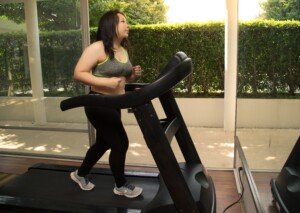 Do you ever wonder what the difference is between the “fat burning zone” and the “cardio training zone”?

Surely you’ve seen these diagrammed in some way on cardio equipment, and perhaps you’ve noticed that the fat burning zone is an easier zone to work out in.

But when you work harder and get your heart rate up higher, the zone becomes “cardio training,” or “athletic training,” and no longer “fat burning.”

So in an attempt to lose weight, you make sure to remain walking, stepping or pedaling comfortably in that fat burning zone.

But have you ever wondered how it is, that exercising harder burns LESS fat? How can this be? This shouldn’t make any sense.

You’ve probably heard that a greater percentage of fat is burned during the fat burning zone, which is also known as the aerobic burning zone.

So surely, the best way to melt off fat is to stay in that fat burning zone, and to make sure you don’t get too out of breath or too worked up, right?

But the higher intensity cardio or athletic training zone burns more TOTAL calories for the same length of time.

This means that the total amount of fat that’s burned with these calories, actually comes out higher than the total fat burned during easier “fat burning” work.

Let’s do the math. Suppose on Monday, you use the elliptical trainer machine for 60 minutes.

You stay within that target heart rate that correlates to the fat burning zone. You burn a total of, let’s say, 200 calories.

I choose 200 here arbitrarily, just for mathematical purposes. Everyone’s metabolism is different, and calorie readouts on machines are based on an average-height, 150 pound male. You may be a 5-2, 170 pound female.

So keep in mind the mathematical concept here, rather than how many calories your particular body might burn up in 60 minutes.

Now, let’s say on Wednesday, you get on the same machine, but train in the cardio zone. You pedal faster at a higher pedal resistance. You drip sweat.

You hear yourself breathing hard. You huff and puff. After 60 minutes, you’ve burned 300 calories.

In cardio zone training, about 40 percent of the calories burned will be fat.

Note: 40 percent is a smaller number than 50 percent. HOWEVER…what’s 40 percent of the 300 calories that were burned?

It’s 120! Your total fat-calories burned were 120! This is 20 percent MORE fat burned, than what you did in your fat burning session on Monday!