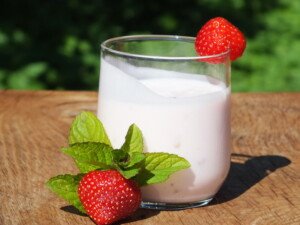 Mmmm, a glass of chilled kefir just may relieve you of your microscopic colitis symptoms!

Give this probiotic a try; it will help re-balance the bacteria in your gut. An imbalance may be causing or contributing to your microscopic colitis.

When I had a flare of microscopic colitis, kefir seemed to have a beneficial effect.

I won’t go the route of prescription or over-the-counter drugs because these only address the symptoms, if they work at all. In fact, Imodium will delay the inevitable by causing constipation.

Kefir apparently works by actually treating microscopic colitis. Essentially, kefir is yogurt in drinkable form, but it also contains live culture bacteria, or, the “good” bacteria, the beneficial bacteria that you need for optimum intestinal health.

Kefir is a probiotic; probiotics are good or “friendly” bacteria that are an integral part of a healthy balance of microorganisms in human intestines.

The human GI tract contains both good and bad bacteria, and problems can arise when there is an overgrowth of bad bacteria.

In fact, it’s been conjectured that microscopic colitis can be caused by an overgrowth of bad bacteria; or, to put it another way, an imbalance in the ratio of good to bad bacteria in the intestinal tract.

Dr. Kenneth Fine, a gastroenterologist who has studied microscopic colitis, believes that the bacterial imbalance has a genetic component.

However, the expression of this genetic predisposition can be triggered by a few factors:

1) The body for some unknown reason “attacks” the bacteria that grow in the colon, thereby offsetting the balance; 2) This can be triggered by NSAID’s and aspirin, antibiotics and eating certain foods that favor the growth of “bad” bacteria.

Because kefir is a probiotic, ingesting this drink helps restore a more optimal balance of good bacteria and bad in the gastrointestinal tract.

From an anecdotal perspective, this is why this thick, probiotic drink pretty much puts my microscopic colitis out of commission (albeit with occasional diarrhea).

I’ve gone off kefir several times, and every time, the symptoms return: a lot of diarrhea and large amounts of undigested food in my stools.

When I’m on the probiotic, my stools more often are well-formed, rather than loose and easily-dispersed (what I call semi-diarrhea), and based on the appearance of my stools while I’m on kefir, there’s less malabsorption of food.

Kefir is recommended for controlling diarrhea caused by antibiotics and infections.

According to webmd.com, probiotics may one day be more universally recommended for treatment of inflammatory bowel disease  —  and microscopic colitis is a form of IBD.

If you have microscopic colitis, go straight to the kefir, because it’s drinkable, which makes it more convenient than yogurt (which also comes in probiotic form). Probiotic pills have not worked for me at all, but this doesn’t mean they won’t work for you.