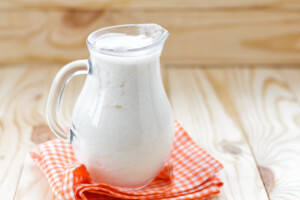 Let’s hear it for kefir as a natural treatment for microscopic colitis: This stuff works!

Microscopic colitis has no known cure, and treatments include natural and pharmaceutical.

However, treatment for microscopic colitis is hit or miss, and often nothing works to alleviate symptoms.

If you want to go the natural route with microscopic colitis treatment, I urge you to try kefir.

“Kefir is a fermented dairy product with high concentration of probiotics and special yeast which has been known for hundreds of years for its health benefits,” says Natasha Fuksina, MD, an internal medicine and obesity specialist who combines traditional, integrative and functional medicine to restore health and function.

“It contains multiple species of Lactobacillus, Lactococcus, Bifidobacterium and yeast.”

And they probably had no effect whatsoever. Don’t let this fool you!

I have microscopic colitis — have had a few major bouts — and they did not respond at all to probiotics in pill form.

However…every time I drank Kefir for more than a few days, the symptoms just about cleared up. This beverage is yogurt in drinkable form.

It’s thick like a milkshake and comes in different flavors. However, I’ve been drinking only the plain.

Flavored varieties contain more sugars, and for all we know, this can interfere with the treatment process.

No less, though I have not yet experimented with how effective less might be.

When on Kefir, I hardly had any diarrhea, and my stools looked closer to normal.

They were not as “dispersable” and contained noticeably less undigested food matter.

Thanks to this probiotic drink, my stool color was often normal and so was the caliber, shape and solidity.

It’s good to know that when I eat almonds, most aren’t passing right through me.

When I stopped drinking kefir, the symptoms of microscopic colitis returned: in my case, diarrhea nearly daily, at times twice a day, and lots of undigested food in my stools.

I’d go back on the probiotic drink, and these symptoms practically disappeared.

The reason I’d been on and off kefir is because, among a few other reasons, I wanted to prepare for a food sensitivity test, and wanted the microscopic colitis to be more in progress so that the stool sample could reflect it for the analysis.

Thus, I went off it for a week — and also because I had thought the microscopic colitis had spontaneously resolved.

What I didn’t realize was that the kefir had seemingly subdued it. Not long after quitting the beverage, the symptoms returned.

Within several days of resuming kefir, the symptoms again subsided. This cycle has happened several times now, and it can’t be coincidence.

“When consuming kefir on a regular basis, you introduce numerous colonies of healthy bacteria which can affect your microbiome in numerous ways.

“These newly introduced bacteria can fight harmful bacteria which develop during a colitis attack.

“They can help the good microbiota to proliferate and grow further.

“Furthermore, the bacteria contained in kefir and its byproduct, kefiran, can help modulate immune function and diminish inflammation.”

“One daily kefir drink per day may be sufficient to help control mild cases of colitis, along with other nutritional strategies to keep the gut microbiome healthy and tame the inflammation.”

In conclusion, start drinking kefir today as part of your natural treatment for microscopic colitis, which, I might add, cannot be diagnosed with certainty unless you’ve had a colonoscopy  —  and tissue samples from your large colon are taken for analysis via microscope.