How Kids Can Motivate Anorexic Mom to Seek Treatment 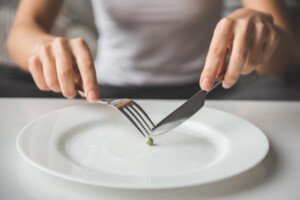 Here are guidelines for kids to help their mother with anorexia nervosa seek treatment.

If you’re a teenager or even younger, and your mother has anorexia nervosa, it’s presumable that you’d like to help out, but are not sure how to go about doing this beyond, “Mom, I think you need treatment for your eating disorder.”

So what, then, can kids do to help their mother with anorexia realize that she should seek out treatment?

“The most important piece is to not blame yourself and to be honest,” says Tammy Holcomb, MS, EdS, a licensed professional counselor who specializes in eating disorders.

“Let your mom know that you love her and are concerned that she is not taking care of herself.”

What does not work so well is if you’re vague, as in, “Mom, I wish you’d get help for your eating disorder.”

This vagueness is almost akin to your mother telling you, “Clean up the garage,” and leaving it at that.

You then step into the garage: It’s a complete mess. You don’t know where to begin. It’s overwhelming.

However, if your mother had been more specific, as in, “Go into the garage with a big garbage bag and put all the scraps of paper, rags and old magazines you see on the floor into it,” the task would be far less daunting.

This principle applies to helping your mother out who has anorexia nervosa.

Holcomb says to give pinpointed examples whenever you can: “For example, telling your mom that you wish she could sit down and have a meal with you.”

People with anorexia nervosa or other eating disorders often don’t believe they are “sick” or need help, and do not perceive themselves as others around them view them, says Holcomb.

She urges specificity, citing another example: “You looked really pretty when you wore a size 8, but now you are too small at a size 4.  I think you have lost too much weight.”

Imagine you’re struggling with math. You’d be more receptive to your mother if she tenderly offered to help, rather than if she criticized you for being “lazy.”

Holcomb explains further, “Also, don’t hold secrets for a sick mom.  Talk to another adult you trust.  Either your dad or someone at school.

“Sometimes adults don’t see things until you point it out to them!”

If your mother has anorexia nervosa, do not give up when it comes to getting her to seek treatment.