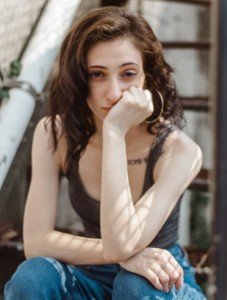 A girl is more likely to develop anorexia nervosa, relative to her baseline inclination, if her mother has this eating disorder.

From an intuitive point of view, it seems as though just the sight of an emaciated physique would be enough to deter the daughter from developing the anorexia that she sees her mother battling with daily.

Mayoclinic.com cites that having a first-degree relative with anorexia (which includes the mother) puts a child at a “much higher risk” of developing this condition.

I’ve seen many women over the years who appeared to have anorexia. I’m not talking about “thin” women (or teens). My 15-year-old niece has what’s considered a “skinny” body.

But if she’s walking down the street in tight jeans and a tee shirt, it’s very unlikely that anyone is going to assume that she has an eating disorder.

She eats normal amounts of food and shows no signs of purging. She’s simply in a vertical growth spurt.

However, I’ve seen what truly appears to be significant undernourishment, including a woman at my gym who (according to my personal trainer’s eye) appears to weigh 75 pounds on a 5-4 frame.

So here’s something odd to consider: A daughter of an anorexic woman is at increased risk of developing this eating disorder, even though her mother’s body would surely be quite alarming in appearance.

“In my experience, the mother’s emaciated body is actually a deterring factor for the daughters developing anorexia,” says

But what about Mayoclinic.com’s statement that anorexia risk is greater in children when a mother has this eating disorder?

Those daughters who never develop anorexia, perhaps, as Dr. Moore explains further, “can more easily recognize that their mother’s anorexia is an illness.”

Another thing to consider when wondering if an anorexic woman’s body can prevent her daughter from developing the illness, is the degree of malnourishment.

Anorexia is on a continuum, just like overeating is. Some functioning anorexics aren’t emaciated, but may look more like my niece.

Dr. Moore explains, “It is much more confusing for daughters when anorexic mothers are thin but not emaciated.”

And when a girl’s anorexic mother seems more fashionably thin than skeletal, she may very well be the recipient of compliments about her thin frame, says Dr. Moore.

If her daughter hears this enough, the daughter may “strive for this thin look,” adds Dr. Moore.

Will the youthfully lean daughters of the 75 pound woman ever aspire to have a body like hers?

I’d think that her three young daughters would rather want a body like Miley Cyrus, Taylor Swift or a Victoria’s Secret model. However, in an effort to achieve that, they may go overboard and actually become anorexic.

A woman with anorexia should not assume that her daughters are at low risk for developing the illness just because she’s skin and bones, or even if her daughters have remarked how frightfully thin she is. The heightened risk can still be there.

In 1991, Dr. Moore founded The Moore Center (now Eating Recovery Center of Washington), which is the longest-established treatment center specializing in eating disorder treatment in the Pacific Northwest.