Can a Thin Girl Become Anorexic or Must She Be Overweight ? 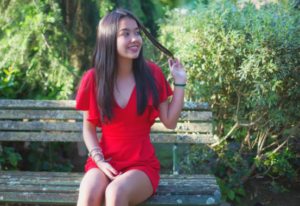 Believe it or not, it’s very possible for a naturally thin teen girl or woman to develop anorexia nervosa; this disorder doesn’t just affect overweight people.

Maybe you’ve read stories of teens who developed anorexia nervosa—and they claim it all started when they felt a bit overweight and wanted to lose five or 10 pounds.

Seems that every case I’ve ever read about, the girl was a little overweight. There are many cases in which someone suggests to the girl that she lose a few pounds, usually a parent or an athletic coach.

It’s not believable that many parents out there are telling their 105 pound teenage daughters to lose weight.

However, there are athletic coaches who put pressure on already-lean girls to drop a few more pounds.

That all said, a girl could be “naturally” skinny and still become anorexic, since anorexia nervosa is a psychiatric disorder rather than a condition of vanity.

How do naturally thin girls or women become anorexic?

“Anorexia nervosa can start with a person of any weight or body type,” begins Linda Centeno, PhD, clinical psychologist, and assistant director of the Koch Center in NJ that specializes in eating disorder treatment.

“The act of dieting is often linked as a precursor to the development of an eating disorder.

“In fact, 35 percent of ‘normal dieters’ progress to pathological dieting. Of those, 20-25 percent progress to developing an eating disorder (Shisslak, Crago, & Estes, 1995).”

Pathological dieting is when the dieter is obsessive or extreme in some way, but not to the point of losing dangerous amounts of weight.

For example, such a dieter may be subsisting on only two food groups for extended periods, yet be maintaining a body weight within a medically acceptable range.

She may also have a realistic perception of her size – and it may even be quite thin – but she’s fully aware and is interested in maintenance rather than dropping even more weight.

“As we know, dieting is very common in our culture, even from an early age,” continues Dr. Centeno. She cites the following from the National Eating Disorders Association website:

Keep in mind that when young children are trying to lose weight or are on a diet, this doesn’t mean they are headed towards an eating disorder.

Many young kids these days indeed are overweight from excessive consumption of junk food and hence are trying to stick to diets.

Others aren’t overweight and in fact may be what we’d call “skinny,” and are actually restricting food intake to lose weight.

“We do not know the specific cause of anorexia nervosa and why some individuals can diet and not develop an eating disorder,” says Dr. Centeno.

“Most experts agree that an eating disorder is not about weight. Instead, anorexia arises due to a combination of personality, genetics and environment (such as culture, social and family situations).”

We shouldn’t throw all the blame on the so-called scary skinny celebrities such as Angelina Jolie and Victoria Beckham.

I’m having a tough time believing that teen girls actually want a body like Rachel Zoe’s (see below). 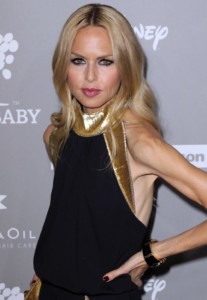 Yes, there are “pro-ana” girls and women who worship this look, but I’m talking about the adolescents, teens and young women who are NOT YET in the throes of an eating disorder, yet would like to lose some weight.

But a fair question is what a naturally thin girl or woman, who wants to lose weight, thinks of Rachel Zoe’s body. If she thinks Rachel looks great…this is a blaring red flag.

“People with anorexia tend to struggle with lower self-esteem than other individuals,” says Dr. Centeno.

“Additionally, individuals with anorexia generally display obsessive behaviors with respect to food and dieting may exhibit an extreme drive for perfectionism.

“Therefore, individuals who develop anorexia often believe that they are never thin enough regardless of how many pounds they lose.”