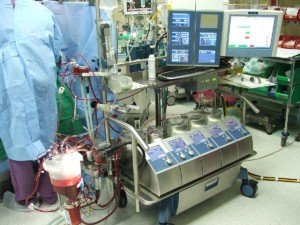 Some controversy surrounds use of the heart lung machine (“on-pump” surgery), as it has been suspected as a cause of neurological problems in a small percentage of coronary bypass patients – problems that were non-existent before their operations.

It is not unheard of for a coronary bypass or other cardiac procedure patient, whose surgery included use of the heart lung machine, to post-op complain of taste problems.

“Change in taste is most commonly due to a disturbance in the sense of smell, known as the olfactory system,” says Michael Fiocco, MD, Chief of Open Heart Surgery at Union Memorial Hospital, one of the nation’s top 50 heart hospitals.

“The heart lung machine may play an indirect role in altering taste.  Most commonly patients complain of a) metallic taste  b) tastes bad and c) no taste.”

Food may taste like cardboard or be extremely bland, and water may have an unappealing taste.

Interestingly, certain foods may taste just fine post-op to the coronary bypass patient who reports a change in taste.

“The heart lung machine’s contribution to this is likely its propensity to cause edema or swelling,” continues Dr. Fiocco.

“This can occur throughout the entire body, including the brain, thus affecting the olfactory system (smell) which, as noted above, will alter the sense of taste.”

Dr. Fiocco explains, “Separate from the heart lung machine, but related to bypass surgery, is the change in taste associated with general anesthesia as well as the side affects of many medications.

“The majority of patients resolve their taste problems within a few weeks without treatment other than occasionally having to change or withdraw certain meds.”

In conclusion, if you have had coronary bypass surgery, and are having difficulty eating due to a change in taste, keep reminding yourself that the diminished or unpleasant taste sensation is temporary.

Also keep reminding yourself that following coronary bypass surgery, you need to eat like an athlete, because your body has been subjected to significant (though controlled) trauma, and is in desperate need of nutrients, particularly protein, for the healing process.