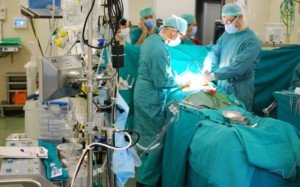 If you need bypass surgery you might wonder about having it done without the heart lung machine and instead with the “beating heart” procedure.

A 2007 Journal of Cardiac Surgery reports that off-pump procedures are a safer option than heart lung machine procedures and reduce complications.

Off-pump surgeries also reduce hospital stays and costs, cut the need for blood transfusions and have been shown to reduce respiratory dysfunction.

But does this mean that off-pump heart bypass has advantages over cardiopulmonary (heart lung machine) bypass?

“I once was performing 80% of my CABG case off pump, but have cut back to 10% because the data just doesn’t support it as beneficial,” says Michael Fiocco, MD, Chief of Open Heart Surgery at Union Memorial Hospital in Baltimore, Maryland, one of the nation’s top 50 heart hospitals.

“Logically, one would think that eliminating the heart lung machine and all that goes with it (large cannula in the aorta, clamping the aorta, etc.), the patient would have fewer complications, but that is not the case.

“It is now reserved for those who are sicker, e.g., COPD, kidney insufficiency, calcified aorta, etc.

“There is clearly a benefit in those patients, but the low risk patient doesn’t seem to benefit.

“Also, it is technically more demanding, so most surgeons shy away from it.”

In order for the heart-lung machine to be used, certain things must be done to the patient’s body.

For example, the heart is bathed in high-potassium fluids that stop the beating.

Tubes from the heart lung machine are connected to the heart, and the blood is rerouted into this device.

The blood comes in contact with the membranes of a porous plastic (where it is believed the blood may pick up micro-particles that eventually end up in the patient’s brain, causing cognitive problems).

But the blood must be routed this way to be oxygenated. It’s also cooled to around 82 degrees before being pumped back into the patient’s body.

That all sounds like a tremendous amount of prep activity, but the overall picture is that on-pump heart surgery is less tedious to carry out than is off-pump.

The heart lung machine does increases risk of stroke two to four percent, and can induce kidney damage, plus heighten risk of post-op infections.

Your Surgeon Has Probably Never Performed Off-Pump Heart Surgery. This Is Not a Shortcoming.

The beating heart technique was pioneered way back in 1965 by a Russian surgeon, but not received with open arms in the States.

However, in the mid-1990s, the off-pump procedure was revisited due to development of new tools that stabilize small areas of the heart, permitting the surgeon to create bypass grafts.

At around 1996, just one percent of cardiothoracic surgeons were trained in off-pump surgery.

As of around 2004, nine percent of coronary bypasses were done without the heart lung machine.

Though beating heart bypass surgery is still not the norm and not considered standard, it’s been performed on over 45,000 people worldwide as of 2001.

And as scary as the heart lung machine sounds, the big picture is that the vast majority of the hundreds of thousands of patients every year in the U.S. who undergo on-pump surgery have successful outcomes.