Do Long Femurs and a Bad Squat Mean You’re Weak? 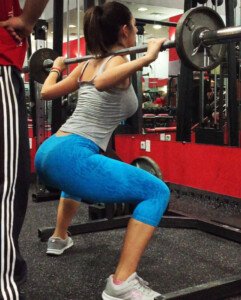 If you’re biomechanically disadvantaged due to femurs that are longer than your torso, find out if this means you’re weak.

When a person with long femurs (meaning, femurs longer than their torso, regardless of overall body height) tries the back squat for the first time, even with just body weight, they immediately realize there’s a problem.

If you clicked on this article, then you already know what the issue is with long femurs and the squat.

You also certainly have come across the term “biomechanical disadvantage,” and perhaps have read quite a bit of content in fitness forums saying that those with long femurs and a short torso can injure themselves doing heavy back squats, and even that they should avoid this exercise altogether.

In short (no pun intended), it’s almost as though having long femurs and a short torso is a disability that makes people weak.

In the truest sense of the meaning of “weak,” a person with this anthropometry is NOT weak. They can be very strong.

Let’s take a really strong beast of a person as an example, say, an Olympic heavyweight weightlifter. Now, let’s lie him on his back.

Though this is an extreme example, its extremeness will clearly illustrate why the person with the long femurs and short torso is not weak, but instead, it’s an issue of body position  —  a body position that he or she cannot access.

So we have this very strong person lying on the ground on his back. Beside him on the ground is a 50 pound kettlebell that he can reach only by straightening his arm.

His job is to lift the weight off the ground  — while maintaining his position of back lying on the ground.

This means he must grab the weight with a straight arm, and because his back must stay on the ground, he cannot bend his arm.

Though he has brute strength (remember, he’s on the Olympic weightlifting team), he will not be able to lift the kettlebell.

Does this mean he’s weak? Or does it mean he’s at a biomechanical disadvantage due to body positioning?

Because he’s not able to get into an efficient lifting position, he is not able to move the weight. It’s a matter of body position, not lack of muscle strength.

Again, this example is extreme, but you can apply a scaled-down version of this principle to the individual with the long femurs and short torso.

They are simply not able to get into an upright squat position, and thus, are not able to utilize the strongest muscles of their body to squat heavy weight.

Instead, their lower back muscles (which are not force production muscles by nature) are made to take some of the weight.

The deeper this person gets into the squat, the more he must lean forward to keep from falling backwards.

Somehow, someway, famed powerlifter Lane Norton pulls this off with a ton of weight, despite having “bad levers” — femurs long relative to torso length: 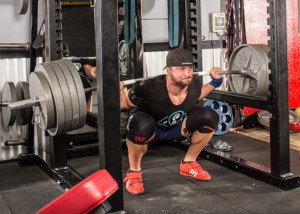 If this forward lean is severe enough, it becomes impossible for most people to maintain an arch in the lower back, and the back rounds, creating the potential for disaster.

This is a very inefficient way to lift heavy weight, but it occurs due to the long femur short torso person being unable to get into the position of upright back while squatting (they are leaned way over). Literally, their long femurs get in the way of the lift.

Now take a look at the femur to torso ratio of the man below. His squat is almost as deep as Norton’s, but check out his ridiculously upright back! 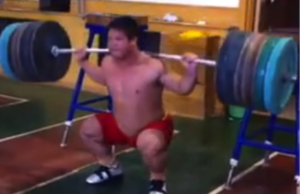 The biomechanical rather than strength issue isn’t just present when trying to squat with a barbell across the upper back.

The long femurs get in the way when picking something heavy off the ground as well (you name it: big potted plant, crate of books, file cabinet, big sick dog).

The individual with this anthropometry has two choices: 1) Squat half-way but lean far over (risking low back injury) to get their hands between the object and the ground, or

2) Squat nearly all the way to keep their back upright while holding onto the object to prevent falling backwards, and while in this position, lifting the object.

The problem with #2, even though the back is upright, is that the heavy lift begins from a deep squat, which is harder than a heavy lift from a half-way squat.

A person whose femurs are shorter than their torso can maintain an upright back as they descend into the squat, and thus can begin lifting the heavy object when they’ve reached half-squat depth  —  less range of motion to do the lift!

So you see, long femurs and a short torso do not make a person weak; they just prevent that person from getting into the most efficient body position to perform a lift.