Causes of the Butt Wink in Back Squatting 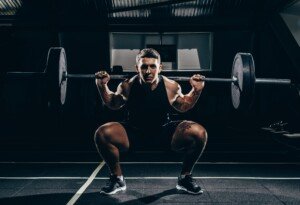 It’s a myth that the squat butt wink is caused ONLY by tight hamstrings or tight hips!

Want to know what really is behind the cause of the butt wink motion that so many people do when performing the back squat?

The answer is really quite simple: The trainee fails to maintain a straight back.

But then, that begs the next question: Why do people fail to keep a straight back when performing this version of the squat?

I’m a certified personal trainer. And I have a second explanation for the butt wink, though this second explanation may, at least in part, explain why a person fails to keep their back straight as they begin closing in on depth. And that’s “bad levers.”

Though not all people who commit the butt wink have relatively long femurs (or femur bones longer than their torso), it’s a fact that long femurs (relative to torso length, regardless of one’s total body height) predispose a person to the butt wink problem.

But as just mentioned, this may all point back to why a person fails to keep their back straight.

When I say straight, I don’t mean vertical, but rather, not rounded or hunched; an arch in the lower back. The butt wink is the opposite of the arch; the lower back rounds out or loses its extension; it becomes flexed.

I can’t say with 100 percent certainty that this is caused by the fact that my femurs are relatively long compared to my torso, but I can definitely rule out BOTH tight hamstrings and tight hips. I have good hip flexibility!

However, I can hit just below parallel before the butt wink starts in. But still, if I’m nearly ATG, a slight butt wink is present, and has absolutely nothing to do with my hamstrings, hips or ankle mobility.

A butt wink will occur in anyone if they go low enough in a wall squat, in combination with their feet being close enough together, toes pointed straight ahead.

In other words, a person with short femurs, long torso, rubber-band-like hamstrings and hips, will produce a butt wink if they’re right up against the wall, feet less than shoulder width apart (or even at shoulder width), and sink ATG.

Often, the butt wink is caused simply by lack of concentration. Once a person is aware of it, it can sometimes be instantly or near-instantly corrected.

Other individuals will need to practice, and sufficient practice may eliminate the problem.

Poor squat form with the legs can also cause it. Have a qualified partner or personal trainer watch you; trying to watch yourself as you squat is not a practical way to practice this exercise.